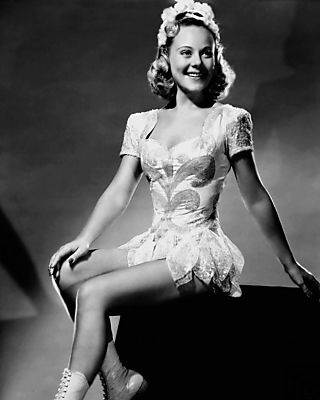 She had a fine figure for figure skating.
Advertisement:

Sonja Henie (8 April 1912 – 12 October 1969) was a Norwegian figure skater and film actress. The daughter of a wealthy Norwegian family, her parents encouraged their children to take up sports. When Sonja turned out to be gifted at skating, her parents got her the best tutors, which definitely paid off.

Her films were such hits, 20th Century Fox, her old studio, tried to replicate the success with Carol Heiss in Snow White and the Three Stooges.

She is caricatured in the Donald Duck cartoon The Autograph Hound and the Looney Tunes cartoon Hollywood Steps Out.