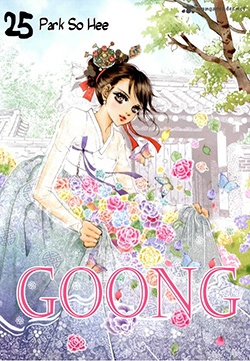 Goong (Hangul: 궁, literally Palace) is a soonjong manhwa series by author Park So-hee. It is currently published in Canada and US by Yen Press. It was adapted into an even more well-known live-action comedy/drama series, which had its first season run from January 11 to March 30, 2006.

In an alternate universe, where Korea was never conquered by the Japanese and divided by war. Still ruled by a constitutional monarchy, the royal family lives in splendor. All the old, historical Korean monuments of our world are actually beautiful palaces full of life in this world. Born to commoner parents, Chaegyung lives the life of an average high school girl earning average grades. One day, she inadvertently witnesses the crown prince Shin's proposal of marriage to another high school girl, Hyorin. She rejects the proposal, so that she may pursue other ambitions. Shin also concludes that the rigid rituals of palace life aren't suitable for the girl he loves. Instead, he marries Chaegyung. As it turns out, he had betrothed to her long ago by the former king. Chaegyung moves into the palace before the wedding in order to familiarize herself with palatial customs. Her unhappiness with the oppressive marriage worsens, but Shin promises to divorce her once he becomes old enough to seize the throne.

After the national wedding ceremony, the newlyweds begin their nightmarish honeymoon. Chaegyung grows homesick and finds the ancient rules of royalty exhausting. But, subtly she discovers herself slowly growing fond of Shin. He treats her sweetly on some occasions. Meanwhile, Hyorin's jealous erupts over Shin's growing kindness of towards Chaegyung. She experiences a change of heart and now pursues him for her very own.

Lady Hwa-Young,Yool's mother and Shin's father were in love once, but chose to marry the crown prince of that time for the sake of her ruthless ambitions. When Yool's father died young, a new crown prince was selected to occupy the throne. Yool's mother took her son on a long journey to England. However, the king grants his late brother a posthumous coronation. Now considered the widow of a former monarch, Lady Hwa-young gains much authority at the royal court and the political winds begin shifting dangerously. Shin and Chaegyung are now the only obstacles in the path of her ascension. She plans on seating Yool upon the throne that should've belonged to her husband, but for a twist of fate.

Chaegyung gradually acclimates and grows into her role as crown princess. She also learns to love Shin. However, she can't stand that he still associates with Hyorin. Her jealousy only confirms her feelings for him. For his part, Shin feels that the naive Chaegyung only gets in the way in his struggle to seal his royal authority over the country. Seeds of jealousy sprout when he observes her growing friendship with Yool. And Yool has his own plans to claim the the throne... as well as Chaegyung's heart.

Goong has examples of: