Anime / Lagrange: The Flower of Rin-ne 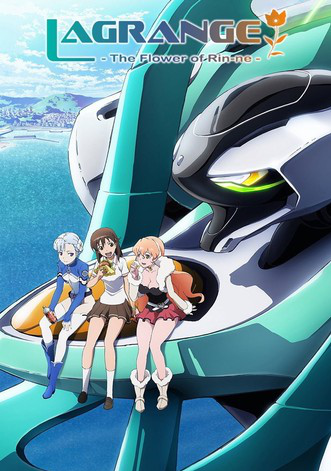 Lagrange: The Flower of Rin-ne (輪廻のラグランジェ Flower declaration of your heart, Rinne no Raguranje) is a scifi mecha anime produced by Production I.G. The first season aired during the Winter 2012 anime season and the second during the Summer season of that same year. Each season is twelve episodes long. Two OVAs were made, one called "Kamogawa Days", which acts as something of an epilogue to the first season, and "Kamogawa Memoria", which is a recap. Twelve, three-minute long specials were included between the two seasons' Bluray/DVD releases.

Madoka Kyouno is the sole member of the Jersey Club, a school club dedicated to helping people. The seaside town of Kamogawa gives Madoka plenty of opportunities, and she's always prepared to lend a hand. Or even save a life, which is what happens one day when she rescues a mysterious silver-haired girl from drowning. The girl turns out to actually be an alien princess nicknamed Lan.

Lan wants Madoka to pilot an Ovid, a robotic aircraft that can transform from an airplane into a bipedal mecha. Despite only learning about them that day, Madoka has vague memories regarding one specific Ovid, the green Vox Aura. Lan herself is connected to the blue Vox Lympha and another alien girl called Muginami is bonded to the orange Vox Ignis.

The three of them work together with the military organization Nuvomundos to combat the members of the alien organization of Kiss. Kiss's leader, Lord Villagulio from the planet De Metrio, wants to get his hands on the Vox Units so he can destroy the Polyhedron Federation and their planet Le Garite. And he doesn't care who he hurts in order to accomplish this goal.

As if the threat of imminent warfare wasn't enough, an eerie legend about the Voxes hovers over the Jersey Club's head: when the green, blue, and orange demons awake, the end of the world is nigh.

Viz Media originally held the license for the show's English release. When they lost the license, RetroCrush picked it up for streaming. Both the sub and English dub are available for viewing.

A manga adaptation titled Rinne no Lagrange: Flower Declaration of Your Heart ran from 2011 to 2013. A prequel manga called Lagrange: The Flower of Rin-ne ~Dawn of Memoria~ was serilized in Young Gangan from September 2011 to February 2013. Memoria focuses on the student lives of the couple of Kiss members that appeared in the anime.

A PlayStation 3 game called Lagrange: The Flower of Rin-ne -Kamogawa Dream Match- was released on August 23, 2012.