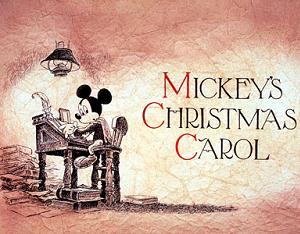 For years, Mickey Mouse, a once-mighty force in animation, was but a memory. After his fall from popularity in the 1940s, and his final appearances in the 1950s, it seemed like there was no future for the mouse save as a corporate symbol for Disney.

Mickey's Christmas Carol is a 24-minute film, and a fairly straightforward adaptation of that one classic story everybody knows about by now. Despite the short being billed as Mickey's comeback, he serves only as the character of Bob Cratchit. Scrooge McDuck (in the role of—take a wild guess—Ebenezer Scrooge!) carries the bulk of the film instead, making his first animated appearance since the 1967 educational short Scrooge McDuck and Money (Otherwise, up to this point he'd only appeared in the Carl Barks Uncle Scrooge comics and this short's precursor, a storybook album from The '70s.), along with the debut of Alan Young as his primary voice actor.

Debuting as a supporting feature with the 1983 theatrical re-release of The Rescuers (after an animators' strike delayed an intended 1982 premiere on television), this adaptation was fairly well-received and nominated for an Academy Award as Best Animated Short Film. In 1984 it began airing annually around Christmas on network and cable television and remains a holiday season favorite to this day. In 2001, it was included in the Christmas special Mickey's Magical Christmas: Snowed in at the House of Mouse.

This animated short features examples of: