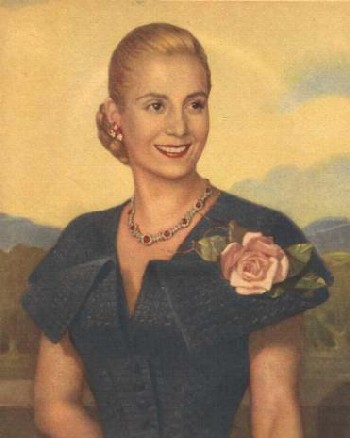 María Eva Duarte de Perón (7 May 1919 – 26 July 1952), popularly known just as Evita, was the wife of Argentinean president Juan Domingo Peron, and both of them are considered the leaders of Peronism.

She was born in Los Toldos, a small village in the Pampas, Argentina to a wealthy rancher and his mistress, both descendants of Basque immigrants.note Her exact date of birth is uncertain: a birth certificate lists one María Eva Duarte as being born on May 7, 1922, while her baptismal certificate gives her name as María Eva Ibarguren (her mother's last name), born May 7, 1919. Some historians have speculated that the former was forged to erase an unhappy past prior to her marrying Juan Perón in 1945. Her official autobiography contains no recollection of her childhood, her birth date, or her birth name. When her father died, she and her siblings were brought to the funeral, causing a small scandal when they arrived. They were allowed to pay their respects and then ordered to leave at the insistence of his wife, which remained a bitter memory for Eva into adulthood. Her family moved to Junín, and Eva finally moved to the city of Buenos Aires in 1934. She became a famous radio actress, working in radio telenovelas and appearing at magazines. Remember that in 1934 television was not a massive media yet, just a recent invention in its testing phases. Being 1934 it also meant that Argentine women still possessed very few rights.

President Ramón Castillo was deposed in 1943 by a military coup. Pedro Ramírez became the new president, and General Juan Perón the secretary of labor, a minor and inconsequential office. However, Juan Perón became increasingly popular with his actions in support of the workforce. Eva Duarte met Juan Perón during a fundraiser in support of the victims of a recent earthquake in San Juan. Eva slowly began to give up her acting career and instead work with an actor's union. Perón was removed from his post by the military, but a huge and unprecedented demonstration in his support on October 17 forced them to restore him. They were married after that, and Eva Duarte became Eva Perón. Perón ran for president in the 1946 elections, and won by a landslide despite the US support for the other candidate.

Eva Perón led the ministry of labor during her husband's presidency, and became highly popular. She also promoted the right to vote for women, which was passed in 1947. She made a diplomatic visit to Europe, ravaged by World War II.

When Perón's first term was nearing its end, she was suggested as a possible vice-president for the second one, as he would run for re-election. However, she was not sure about it, as she had contracted cancer a short time earlier. A huge supportive demonstration urged her to accept the candidacy, but she refused it. There are other alternative explanations for her refusal, such as the resistance of the military or that she wouldn't be able to keep her current work if she became vice president (which, in day-to-day politics, just means a luxury seat in the senate, but without even the power to vote unless there is a tie). In any case, she did not accept the vice-presidential candidacy. She attended the October 17 celebration (now an annual Peronist celebration), with the people being aware that she had cancer. She was hospitalized shortly after that. As she could not leave her bed during the 1951 elections, a ballot box was taken to her room so she could vote in the first election that allowed women's suffrage. Regardless of her critical condition, she attended the celebration of Perón's second term. She finally died on July 26, 1952.

Perón could not finish his second term, as a military coup deposed him, sent him into exile in 1955, and proscribed Peronism. Evita's body, kept at the CGT union, was stolen by the anti-Peronist military and disappeared. For several years its fate was unknown. It was finally returned to Perón (living in Spain by then) in 1971, when a new military dictatorship negotiated to call for open elections and lifting the proscription that Peronism endured for almost 2 decades. Evita's body is currently kept at La Recoleta cemetery.