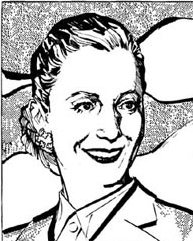 "Evita: Vida y obra de Eva Perón" (in English "Evita, life and work of Eva Perón") is a comic book with the biography of Eva Perón. It was made by Argentine writer Héctor Germán Oesteheld and artist Alberto Breccia.

The comic explains her birth in a distant rural city, her time as a radio actress, her meeting and marriage with Juan Peron, the presidency of Perón, and her death by cancer. The story is fully narrated by an omniscient narrator, and lacks any Speech Bubbles.

The comic could not be published in its day: the military government forced to cancel the publication and destroyed all copies made of it. Javier Doeyo managed to found the script and arts in 2002, and published it.