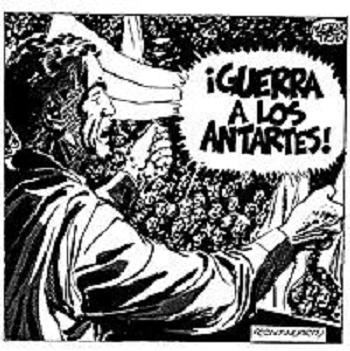 La guerra de los Antartes is an Argentine comic book made in the 1970s by Héctor Germán Oesteheld and Gustavo Trigo. Oesterheld wrote it when he was working at the "Noticias" magazine, a propaganda outlet of the Montoneros terrorist group (and with no relation with the modern "Noticias" magazine, published by Perfil).

The action began at the Argentine antarctica, where a base was overrun by unknown forces. It soon becomes clear that they were dealing with an alien invasion. The few soldiers present were incapable to stop the OVNI, who buried itself in the Antartica and created a massive headquarters. All the countries in the world joined forces to attack the aliens, to no avail. Then the aliens made a threat: Earth must surrender, or else Dallas (United States) and Smolensk (Soviet Union) will be destroyed. The armies movilized to protect both cities, but they were destroyed anyway, by unknown means. The aliens made a new threat: Earth must surrender, or else Chicago and Boston (United States) Krakov and Leningrad (Soviet Union) will be destroyed. Earth surrenders. The world leaders meet the alien leader at Stonehenge, who gives them the ultimatum: Earth must give South America to the aliens, and there shall be peace. The United States and the Soviet Union agree; as the Antartes had agreed to mantain their status as world powers. Zaire proposes an alternative action to destroy the aliens, but the Americans nuke their country, to prevent it.

The people in Argentina heads to Plaza de Mayo, to find out what will happen now; and the aliens show up above Casa Rosada. They try to convince the counsels to rule on their behalf, but they refuse, and manage to kill them. The president, the "Grone" Andrada, gives a last order: "War to the Antartes!". The other aliens, still in the ship, kill him right there, at the balcony of the Casa Rosada, and start a killing spree.

The story was not finished: In the real world, "Noticias" was closed by decree of president María Estela Martínez de Perón, and the police overran the staff. Most people who had the old "Noticias" magazines got rid of them, to avoid the risk of being considered tied to the terrorist Montoneros. For many years, the comic book was lost, until Colihue managed to republish it.