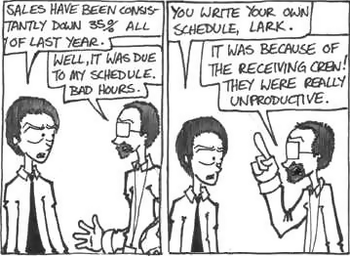 Gus: In these situations, we must emulate the Prime Minister.
Dave: What, cock it up and then blame someone else?
— Drop the Dead Donkey, Pilot episode
Advertisement:

It's never easy to admit that we are responsible for our actions and deserve to be blamed — in fact, for some people it's one of, if not the most difficult thing(s) to do — and it is often far more comfortable to play the Blame Game and convince ourselves that it is the fault of another, even though this is the coward's way out. We may blame others even when we know deep down in our hearts that it is our fault. Due to the Rule of Drama, fictional characters will blame themselves for things going south most of the time, but there are some cases where the character who really is to blame will blame everyone else instead. Common variations include:

Sub-Trope of Psychological Projection. This is a frequent component of Comedic Sociopathy and Revenge Myopia. Also tends to involve Moral Dissonance. The diametric opposite of It's All My Fault. A character prone to this will likely try Glad I Thought of It, too. Compare Hypocritical Humor, which can involve a similar blindness to one's own flaws, and Implausible Deniability. See also It's All About Me and Narcissist, which are key reasons why a character would fall into any of the above. Also compare Backhanded Apology, an insult disguised as an "apology" where the perpetrator attempts to shift blame onto their victim e.g. I am sorry you were so stupid as to fall for my deception. If the character doesn't blame others, but isn't sorry for what s/he's done, see The Unapologetic (however, the two tropes can overlap, generally when the character says "I Did What I Had to Do"). This trope is the defining characteristic of The Unfair Sex. Can overlap with Everything Is Racist, when the person blames their failings which are clearly their own fault on societal prejudice and hatred towards people of their race/gender/sexual orientation/taste in music/whatever. If the person is upset that their victims dared to fight back, s/he is likely Feeling Oppressed by Their Existence. A rebuttal to this trope would involve Stopping the Blame Game.

The formal term for this is "self-serving bias"

, and it is a key personality trait of both The Sociopath and the Narcissist. Related cognitive biases include the defensive attribution hypothesis,

as well as the fundamental and

Compare with Mama Didn't Raise No Criminal, for parents that try to shift blame off of their kids, rather than themselves. Subtrope of the Sin of Pride.

It should be noted that in fairness, many times this can be partially justified (not entirely, but partially) by the other person they are deflecting the blame onto having at least contributed to their mistake or not done anything to prevent it. From a certain point of view, the other person may be just as guilty or even more.

NOTE: Please remember that examples of people blaming others for something that's clearly someone else's (i.e. a third party's) fault is not an example of this trope; that's Misplaced Retribution. This trope is only for when people attempt to shift the blame off of themselves.

Examples, that are never wrong!:

Miss Probably All Your Fault

When Bitsy drops one of her earrings down an old prohibition tunnel and tells Helen to get it for her and she follows along, they get locked down there and Bitsy blames Helen for it despite making her go get her earring.

Miss Probably All Your Fault

When Bitsy drops one of her earrings down an old prohibition tunnel and tells Helen to get it for her and she follows along, they get locked down there and Bitsy blames Helen for it despite making her go get her earring.