Never Live It Down 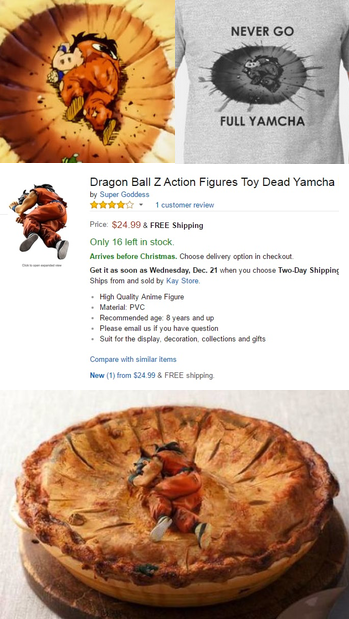 Yamcha will never live this down.note That would make a pretty cool cake or pie design, though... or not.
The reader also knows that everyone poos. But if the first thing a character does is poo in front of the reader, the reader will think of him as the Pooing Character forevermore.
— How NOT to Write a Novel
Advertisement:

Many people have the tendency to take some characters and narrowly define them based on one action or event, to the exclusion of other, often more important, actions of that character.

Sometimes, this is perfectly understandable, if that action or event stands out more than anything else the character did. But just as much, it doesn't, and it can seem as if some people just haven't been paying attention.

Let's take a hypothetical show, Bob Loves Alice. There is a fan favorite episode where Bob gets caught up in a game of darts. He isn't that good, and he never really tries darts again. A bunch of fans like that episode enough that, in loads of fan fiction, Bob sucking at darts is his defining characteristic and it's what everyone knows him for, when in actual Canon, it's never really mentioned again.

In short, it's like Flanderization, but instead of the canon actually making the character like that, fanon causes everyone to think the character is like that. Sounds silly, but it's all too real.

On the internet, it is usually the person's never-lived-it-down aspect that undergoes Memetic Mutation.

This can also turn even worse when those fans start Running the Asylum in that show's later seasons, and now everyone on the show talks about how Bob sucks at darts (maybe even calling him "Sucky Dart-Playing Guy" or suchlike) while ignoring all the other things Bob has done since then. But you never see Bob playing darts, because surely we've seen enough of that. No, we haven't. We've seen it once. And since this is placing all of Bob's more prominent traits and events behind this minor one, it even risks taking away a dimension of Character Depth.

Die for Our Ship victims are a subset of this, best remembered for being the ones that got in the way of a lot of people's OTPs.

When the show decides to remind you that Bob-The-Sucky-Dart-Player is not his canon personality, that's Forgot Flanders Could Do That.

Remember When You Blew Up a Sun? seems like this, but it merely harks back to a character's achievements, not pretend that's all the character does. Also related is One-Scene Wonder, where a small guest star starts to dominate Fan Fic.

Keep in mind that in order to qualify for this trope, a person has to have done good things as well as bad ones. An outright criminal or psychopath deserves to be remembered solely for being evil, especially if he/she never had a chance to become famous otherwise.

Has nothing to do with a character who can't forget their sins. For that, see My Greatest Failure, Be All My Sins Remembered, The Atoner, My God, What Have I Done?, or Cartesian Karma. Fallen Hero and Face–Heel Turn are the two most tragic examples of this.

For In-Universe examples of characters being repeatedly reminded of their past failures or embarrassments, see Once Done, Never Forgotten.