Die for Our Ship 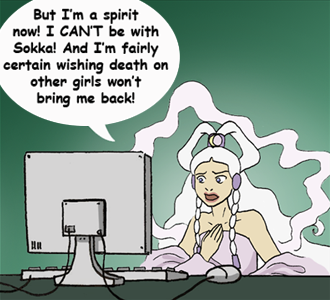 by Booter-Freak
"Shipping leads people to be very mean at totally awesome characters."
— I Don't Like Your Girlfriend

Usually a character is hated for, well, their characteristics — he's annoying, he came in after the show Jumped the Shark, she's a raging Creator's Pet, he's the replacement of a fan favorite; the list goes on. But sometimes a character — even one who was tolerated or even loved before by a general fandom — can become as viciously hated as any Scrappy for a reason that has nothing to do with their actual character: Shipping.

Hate shrines. Death Fics. Revenge Fics of varying degrees of cruelty and sadism. Fics where the formerly sweet and loyal character cheats on the heroine with her two best friends and proceeds to murder her teammates, just so she can be with the Jerk with a Heart of Gold, the Stalker with a Crush, the actual villain, her cousin, her brother, or whomever else the fan may prefer that she be with. Again, the list goes on. Even people who know nothing about the work (or in some cases even the genre) know one thing: much of the fandom utterly hate this character, and it's for a very clear reason - he or she dared to get in the way of their OTP.

This is especially virulent when the ship the fans want is on the wrong side of Cleaning Up Romantic Loose Ends. Paradoxically, this character is as likely to actually be part of an Official Couple as not. Beware if you're a girl and people ship your male best friends with each other, or, conversely, if you're a boy and you hang around girls who Yuri Fans ship together (whether it be a lot or a few). Not all yaoi/yuri fans do this, but it's quite common; fans of heterosexual pairings, for whatever reason, only seem to strike when characters actually fall in love. It does not have to be mutual, however.

All of the main characters in Harem Series run the risk of suffering this to varying degrees (depending on their popularity) in order to rationalize a fanfic author's ship. The most likely haremette to suffer this is the lead female, since she's most often the girl who wins. After all, why should there be any hatred for the other characters if the author's OTP has been made canon? The Unlucky Everydude male lead... can be spared the brunt of hatred since he'll usually compose one-half of an author's OTP. On the other hand, the male lead will also take more hatred for either being a Vanilla Protagonist, or for (by definition of the Harem Genre) not immediately and definitively committing to a particular fan's favorite. The worst of the hatred occurs if fans either have a preference to a Yuri Genre pairing with another member of the harem, or if they can find another more interesting male character around — or create one themselves, if necessary.

In series with a prominent Betty and Veronica Love Triangle, the introduction of a Third-Option Love Interest will often result in the new love interest getting hit with this hard, as shippers on both sides of the triangle put aside their differences and unite against the newcomer.

The Clingy Jealous Girl is an odd example, as she usually loses but is given the same amount of hate from the fandom. Yamato Nadeshiko aren't free of bashing either, which increases a thousandfold if her love rival is deemed "cooler" or "less girly and therefore stronger" by female fans. Tsundere are vulnerable either way: if she's too tsuntsun, she'll be called "Jerkass, man-hater, wife/husband-beater", and, if she's too deredere, she'll be seen as a victim of Chickification regardless of it truly happening or not.

One of the most unusual victim magnets is the Chaste Hero, whose simple non-information makes figuring things out mostly guesswork. Any Bishōnen, especially tough guys and the Ensemble Dark Horse, will also incite Ship-to-Ship Combat over with whom he should be, whether it be a Betty and Veronica in-series or an Author Avatar in a Self-Insert Fic.

Ron the Death Eater is often a result of this. This isn't limited to the fanbase either; when the writer wants to get rid of a threat to the Official Couple in a similar way, they're Derailing Love Interests.

This type of character bashing is usually associated with militant fans of the Fan-Preferred Couple, and, indeed, some of the most infamous examples do come from them. However, this does not mean that canon shippers are always oppressed martyrs. Unless the series is totally finished, certain canon shippers have a tendency to be rather territorial. It's common for the fans of the "victim" pairing to commit Die For Our Ship in return, and it can get just as nasty even if it did start out for the sake of potshotting.

A Sub-Trope of Shipping and Alternative Character Interpretation. Note: although many fans actually believe these types of theories, other fanfic writers may simply use this trope dispassionately and without any of the associated demonization elements, merely as a plot device to enable an alternate pairing in a story.

Compare and contrast Ship Mates, another way for shippers to get a character out of the way.

This is about a fandom attitude; when the third character actually dies in-work (whether canon or fanfic) to enable a pairing, that's Death of the Hypotenuse.

Not to be confused with Going Down with the Ship.

Beware before you proceed, as the examples are sure to contain spoilers for whoever wins, or be particularly infuriating. But please, remember that, like all Fan Dumb, most of these examples are strongly Vocal Minorities and not all shippers of the discussed pairing are "militant" or "rabid".

No Portmanteau Couple Names, please. It makes it unnecessarily hard to figure out which couple you're talking about.