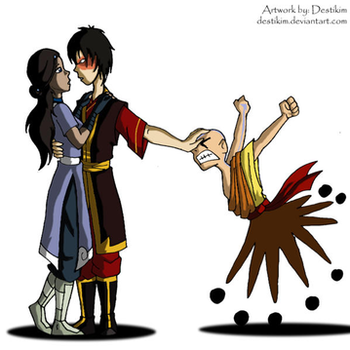 "The character of the fair Jewess found so much favour in the eyes of some fair readers, that the writer was censured, because, when arranging the fates of the characters of the drama, he had not assigned the hand of Wilfred to Rebecca, rather than the less interesting Rowena."
— Sir Walter Scott in his 1830 Introduction to Ivanhoe
Advertisement:

Unrelated discussions degenerate into Ship-to-Ship Combat involving them. Fan Art of them embracing passionately is everywhere. Threads dedicated to gushing over their sweet, fluffy, legendary love and scorching hatred of anyone in the way dominate forums. Bits of trivia are cited and Word of God is creatively interpreted to show that they are going to happen. The Official Couple they're breaking up gets only three votes in fan support polls, possibly including one vote cast by a very alarmed author. They are a phenomenon shrouded in infamy.

And still yet, in spite of it all, they are not happening. Certainly not now, and probably not ever. Whether the story explicitly presents the character in a romance with somebody else, strongly hints that another couple is happening, or Word of God confirms another couple is canon, it's clear that the creator intends for one canon pairing over the popular fanon pairings, even if the latter are way more popular.

A subreaction of Better Than Canon. Most often the result of a Relationship Writing Fumble, or a Romantic False Lead whom the audience latched onto, but sometimes happens by design or because fandoms just make no sense. Can eventually lead to an Author's Saving Throw or a Writer Revolt.

The highest aspiration of a Fan-Preferred Couple is to beat the odds and evolve into an Official Couple. This is about the only way the same couple can end up being both of these things. However, in some of these cases this can backfire on fans if the execution of said romance doesn't live up to expectations, resulting in Shipping Bed Death, which can often lead to a new Fan-Preferred Couple taking its place.

Please note that due to how quickly the romantic landscape and fan preference can change for a work, leading to a fanon ship either becoming canon or falling out of favor with the audience, do not add an example until a month after a work releases/season ends.