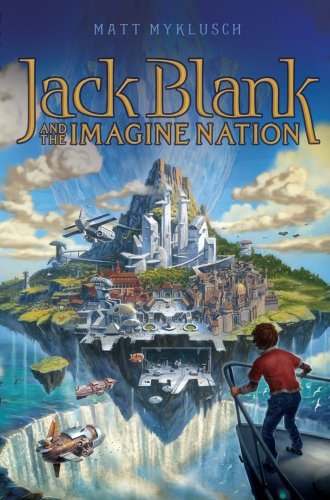 A trilogy written by by Matt Myklusch, who used to work for MTVu, the twenty-four seven running show of MTV for college students.

Jack is an orphan raised in the most depressing, repressive orphanage on the New Jersey turnpike known as St. Barnaby's Home for the Hopeless, Abandoned, Forgotten and Lost. One of the few things that make his existence there bearable is his comic book collection, which he keeps a secret. One day, an aggressive Robo-Zombie from one of his comics rises up to kill him. Jack defeats this robot, only to find another strange visitor: an Emissary who will take him to a secret country that serves as a refuge for the extraordinary: the Imagine Nation. A love-letter to superhero comics and high-impact action flicks, it may seem clichéd at a first glance, though it manages to have good humor and surprisingly well constructed plot twists.

The second book, The Secret War, takes place a year after the first. Jack Blank has five days to develop a cure code before a looming Rüstov threat engulfs Empire City.

The third book, The End of Infinity, takes place a year after the second, where all-out warfare has embroiled the Imagine Nation.