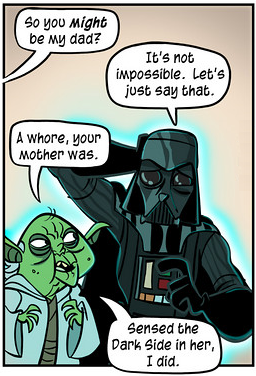 What did you expect from someone seduced by a speech about sand?
So many dudes been with your mom, who even knows if I'm your father?
Darth Vader to Adolf Hitler, Epic Rap Battles of History

A sister trope to Luke, I Am Your Father, this is when the revelation exists not that a person in question is a character's father, but he might be. It turns out that they had sex with the character's mother at about the same time as the fertilization, so the possibility exists. The thing is, they probably aren't the only person who did so.

A common result of the invocation of this trope is that someone uses either science or magic to determine who the real father is. How long this takes depends on the speed of the plot.

As it is predicated on Mama's Baby, Papa's Maybe it is an Always Male trope in most cases. Female cases are still possible, when the mother is separated from her child shortly after birth. See also Ambiguously Related.

Note that DNA testing good enough to establish the truth is relatively recent; in historical settings, possible father and possible child will often be left hanging and have to do their best to work things out without knowing.