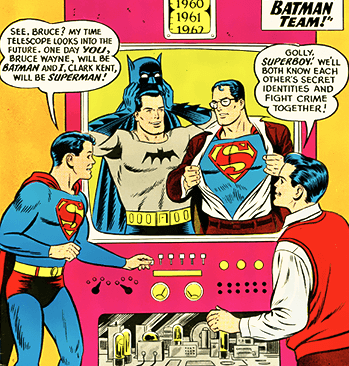 And yet Superboy never warned Bruce about going to that movie...
Vicki: That meant that you could just tune in and see any event in history.
Barbara: Do you mean... a sort of... "Time television"?
The Doctor: Yes, that's exactly what this is.
— Doctor Who, "The Chase"
Advertisement:

A chronoscope or time viewer is a device that uses images that show past or future events like a television. They can sometimes also cause time travel. They are common in sci-fi, and often take different forms.

Some act like cameras recording past and future events and showing what an object would look like in a different time period. Others are more like TVs and show videos and visions of the past and future. Chronoscopes are often used as plot devices, as they can often reveal various details that are necessary for the plot.

Compare Magic Mirror or Crystal Ball, which may have the ability to show these events as well. Intangible Time Travel is, essentially, a more immersive variant of this - analogous to Virtual Reality versus videotape.