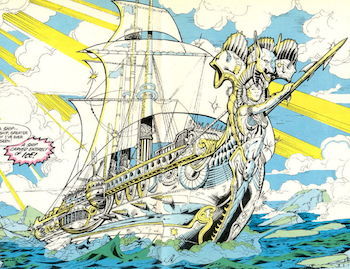 Is a boat carved entirely out of ice cool enough?
"I'm on a boat, motherfucker, take a look at me
Straight flowin' on a boat on the deep blue sea
Bustin' five knots, wind whippin' out my coat
You can't stop me, motherfucker, cause I'm on a boat!"
— The Lonely Island, "I'm On A Boat"

Pretty self-explanatory: What the Cool Car and Tank Goodness is to the road, the Cool Plane is to the sky, and the Cool Starship is to space, the Cool Boat is to water, whether it's a steamship, a sailing ship, or a submarine. A sufficiently large Cool Boat may also serve as headquarters for the characters. If the hero's primary place of residence is a boat that the hero owns and can take wherever he wants across the waters, that's a Houseboat Hero. When the crew are just as cool and badass and the story is set before the production of metal ships, it could mean Wooden Ships and Iron Men.

On the "boat" vs. "ship" thing: A boat is something you can lift out of the water and place on the deck of a ship.note You can ship a boat, but you can't ship a ship. (Except submarines are boats, a tradition dating back to the early submarines, which were invariably tiny enough that they could be placed on the deck of a ship. Tenders usually are too, no matter how big they are.) And remember, it's not an it, she's a she.note Unless you're Russian. Or Spanish. Or Portuguese. Expect to get called on this by hardcore Navy types. That said, ships do count for this trope.

Under no circumstances confuse this with a Nice Boat... which is something entirely different and more disturbing. Though it may depend if you like the boat... And while it is always cool to Get on the Boat in RPGs, the two tropes don't necessarily overlap.

open/close all folders
Advertising
Anime & Manga
Advertisement:
Ballads
Comic Books
Fan Works
Films — Animated
Films — Live-Action
Literature
Live-Action TV
Music
Mythology
Pinball
Religion
Gamebooks
In The Eye of Winter's Fury, the 3rd book in Michael J. Ward's DestinyQuest series, the book is set in a Norse hellscape and your character will be riding on the Naglfar, the cursed ship made from the toenails of the dead. This version of Naglfar is no slouch in defending itself, it has an arsenal of ballistae to blast sea monsters with.
Tabletop Games
Theme Parks
Video Games
Visual Novels
Webcomics
Web Original
Western Animation
Feedback

Example of:
Ship Out of Water