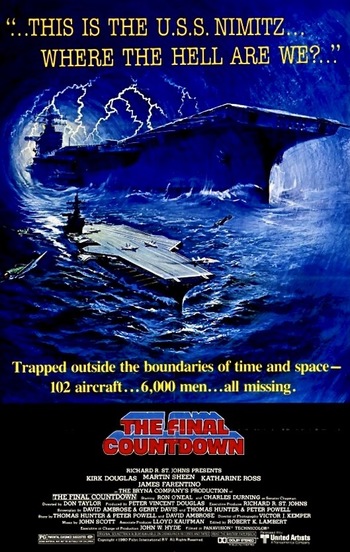 The Final Countdown is a 1980 Science Fiction film about Time Travel directed by Don Taylor.

Warren Lasky (Martin Sheen), a civilian analyst for a major defense contractor tasked with evaluating Navy procedures, is an unwelcome guest on the aircraft carrier USS Nimitz, which is departing Pearl Harbor for an otherwise routine cruise. A few days into the cruise, things change when the carrier is suddenly pursued and overtaken by a mysterious electromagnetic storm. Emerging from the storm, the sailors find themselves cut off from modern civilization — their communications don't work, their escorts have vanished, and there are no ships or planes on radar. However, they are able to pick up shortwave radio broadcasts that seem to date from World War II.

Further investigation reveals that it's no hoax; they have somehow been transported back in time — carrier, planes, and all — to December 6, 1941. Captain Matt Yelland (Kirk Douglas), not being an idiot, realizes the potential of a modern nuclear carrier to turn the tide of the forthcoming Pearl Harbor battle. Air Wing Commander "CAG" Richard Owens (James Farentino) is not so certain, believing that it's impossible to alter the past and that any attempt would be doomed to failure.

Meanwhile, the ship's aircraft have shot down two Japanese Zero fighters that attacked a yacht (part of the Japanese forces' attempts to ensure that nobody could warn the U.S. of the impending attack), and two survivors have been rescued, one of whom turns out to be U.S. Senator Samuel Chapman (Charles Durning). Commander Owens, an amateur World War II historian, recognizes the Senator as having disappeared around the time of the Pearl Harbor attack. More crucially, had he not disappeared, he would likely have been Franklin Delano Roosevelt's running mate in the 1944 election and on his subsequent death, President of the United States.

Now they have a dilemma. Return Senator Chapman to Pearl Harbor, and not only can he alter history by becoming President, but now he's seen Nimitz and thinks that it's part of a secret weapons program intended to trap the Japanese and make FDR a hero. Don't return him, and they've kidnapped or possibly murdered a public official of the United States. Amid the preparations for the upcoming battle, it's decided to compromise: drop the Senator and his beautiful assistant, Laurel Scott (Katharine Ross), off on a deserted island where they can ride out the war. Needless to say, Chapman isn't too happy when he finds out. Nor, it seems, is history changed so easily, as the time storm puts in one final appearance...

For the same initial premise with the sides reversed, see Zipang where a modern Japanese Aegis destroyer named the JDS Mirai gets inexplicably teleported back to the Battle of Midway. And for a similar premise with much more wide-reaching effects, see John Birmingham's Axis of Time novels. Author Peter Albano would reverse the premise with the first book of his The Seventh Carrier series, where a Japanese ship attacking Pearl Harbor is trapped in the arctic, but after getting out several decades later still charges ahead to finish its original mission and attack Pearl Harbor all over again.

Not to be confused with the Europe song of the same name. Although fans have combined them

The Final Countdown provides examples of: