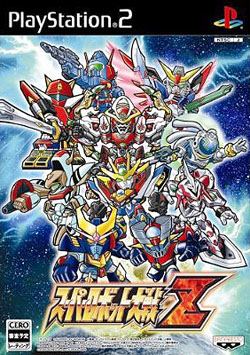 The first Super Robot Wars title to be created under Bandai Namco Entertainment, Super Robot Wars Z broke certain precedents and traditions: for example, at its time, the number of new series was more than any previous Super Robot Wars installment. Released in 2008, players take on the role as either Rand Travis, a wandering repairman/mechanic, who's partnered with the young Mel Beater, or Setsuko Ohara, a member of "Glory Star", a small military squadron in the Earth Federation, alongside teammates Denzel Hammer and Toby Watson, as they are pulled through many conflicts.

The primary plot of Z kicks off with a "Space-Time Oscillation Bomb", which fuses an array of parallel worlds ("Plural Worlds") into one (which would, in later installments, be named "UCW"). This kickstarts the "Plural War", which is confronted by many individuals forming the special squad "ZEUTH".

A PlayStation Portable Sequel entitled The Second Super Robot Wars Z: Hakai-hen ("World Breaking Chapter") is the first of a two-part release, with Hakai-hen having launched in April 2011, and the second called The Second Super Robot Wars Z: Saisei-hen ("World Rebirth Chapter") released one year later in April 2012. This duology features another merged world called "ADW", caused by a seemingly natural phenomena known as "Space-Time Quakes". Here, old members of ZEUTH from the UCW encounter new allies after arriving in the ADW, forming the group "ZEXIS" to combat the "Broken World Incident" (Hakai-hen) and the "War of the Revived World" (Saisei-hen).

Hakai-hen returns every franchise from Z, but Mazinger Z and Getter Robo have their 1970s-vintage entries (including Great Mazinger and Grendizer) tossed for the more modern Shin Mazinger and Getter Robo Armageddon, while Eureka Seven is now represented by its movie adaptation. Zeta Gundam replaces its own movie compilation with the TV series, despite using the same movie character designsnote It's still the same Kamille Bidan from Z, however, background music, and a never-before used movie-exclusive attack.

For some reason, Gravion and The Big O only have one season each listed in the credits for Hakai-hen: Gravion Zwei and season one of The Big Onote The Big O still has some of its season two-only attacks in Hakai-hen, thus one can assume the second season was simply grouped with the first for simplicity's sake, only for the first season of Gravion to reappear in the credits of Saisei-hen. 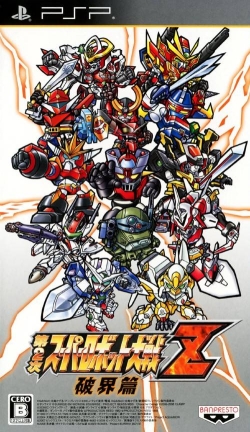 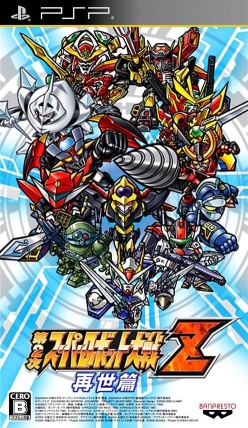 The Third Super Robot Wars Z is the final part of the series, in a simultaneous release for the PlayStation 3 and PlayStation Vita. Like Hakai-hen and Saisei-hen, it is also a two-parter, with the first half Jigoku-hen ("Time Prison Chapter"note Jigoku also means "Hell", thus "Hell Chapter" could work) having launched in April 2014 and the second half Tengoku-hen ("Celestial Prison Chapter") released a year after. Notably, the former drops most of the cast from Z (who were just hanging around by that point), with only a few exceptions, in favor of new series. The latter brings back a few more.

With peace returning to the world of ADW, members of ZEUTH travel through the "Abyss", the hole left between dimensions, to return to their world of UCW. Unfortunately, a new battle awaits them when both worlds and other Alternate Universes are merged into one, leading old members losing their memories of their experiences and abilities. All parties of this strange new universe band together to form "Z-BLUE" to combat the forces that threaten this new Earth and unravel the mysteries concerning the entire saga. 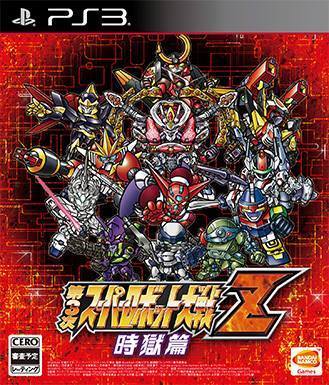 The Big Three of Studio Gainax, together at last. 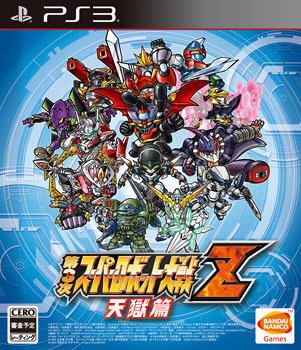 Note that Z is designed around breaking the old tropes previous Super Robot Wars installments had, so expect a lot of aversions, inversions, and subversions.

Tropes pertaining to multiple characters and the entirety of the Super Robot Wars Z saga are: