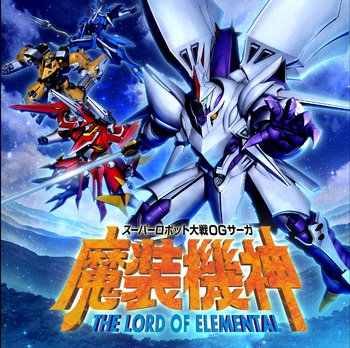 Introduction à l'histoire universelle, from the prologue of the game.
Advertisement:

Super Robot Wars Gaiden (subtitled as Masou Kishin: The Lord of Elemental) is the first Original Generation game EVER. That said, it was released on the Super Famicom in 1996, featuring some of the best 16-bit visuals ever, mecha drawn to scale (the first SRW to avert the Super-Deformed formula), and had a storyline that made Super Robot Wars 4 look like Fan Fiction. Suffice to say, this is the best Super Robot Wars installment on the console.

The story of The Lord of Elemental tells solely on the origins of the entire Masou Kishin cast, and the genesis of the long feud between Masaki Andoh and Shu Shirakawa. The plot is split into two parts: "Part 1" occurs prior to the events of Super Robot Wars 2, while "Part 2" takes place following the end of Super Robot Wars 4. Also, this was the first SRW that could have been released for localization, but it's rather racy, risque dialogue sadly made this a No Export for You. It's also the first SRW to incorporate voice acting, the first to use an angle view of the scenario map at 45° (commonly seen in all SRWs post-The Lord of Elemental) and the only series where a unit's elevation and the direction it is facing at the end of its turn are important for combat calculations.

Take note that although characters from the main Original Generation continuity do appear in La Gias via the Super Robot Wars EX scenarios of the Second Original Generation, they are not considered part of the Masou Kishin series.

Additionally, a Fan Translation of The Lord of Elemental on the Super Famicom has been released, allowing an English language experience for the beginning of Masaki's tale.

Tropes common to the Masou Kishin series are: