This page is an index for characters who appear throughout the Super Robot Wars Z saga. Due to the large number of individuals, this sheet comprises of those who make their debut in the original Z. 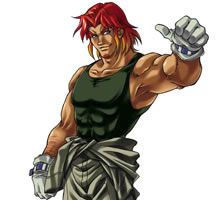 One of two halves of "Beater Services", a mechanic service, Rand Travis is the male protagonist of Super Robot Wars Z. A huge guy at 27 years-old (according to his official profile) with a good sense of humor, he is looking for his missing master Cielo Beater, and assisted by his master's daughter Mel Beater. He's known as "The Crusher" after his tendency to destroy more things than he fixes, an In-Series Nickname he doesn't take so well. Being in the late-twenties, Rand has a lot of experience in dealing with all sorts of people, which is why he sort of tolerates Asakim Dowin, despite the atrocities he commits against Setsuko Ohara, and offers genuine, heartfelt support to her following those encounters with Asakim. He pilots the Gunleon, a GaoGaiGar-like mecha carrying a huge wrench and an assortment of spanners, nailguns and chainsaws with which he can trash his enemies just as efficiently as he can repair damaged allies. He and the Gunleon exemplify these tropes:

Rand's sidekick and co-pilot of the Gunleon, as well as its owner, Mel is the other half of "Beater Services"; her father Cielo was Rand's mentor. Tropes related to her include: 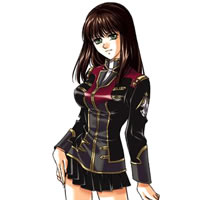 Female protagonist of Z, Setsuko's an orphan thanks to her parents' death via the Colony Drops, and was drafted into the Titans and placed in the "Glory Star" squad under Denzel Hammer and Toby Watson. She has a rather timid, quiet and demure attitude, making her question her purpose as a Titan, and indirectly making herself and the rest of the team the Titan's go-to Butt Monkeys. While out on a training mission in the new Virgora mecha, Glory Star become embroiled in a skirmish with the AEUG's Quattro Bajeena and Kamille Bidan. In the confusion, Setsuko mysteriously transports herself, Toby and Denzel into another world.

While finding out what's going on, Setsuko encounters the enigmatic Asakim, and everything starts going downhill, as her first experience with him was his unceremonious murder of Denzel. If that isn't enough, he later kills Toby in front of her, beats her up and possibly rapes her (we aren't sure due to a scene change). If that still isn't enough, Asakim arranges a meeting between Setsuko and the Alternate Universe versions of Toby and Denzel, only to see that Asakim has convinced them she's their enemy. It turns out Setsuko possesses the Sphere of the "Sorrowful Maiden", which grows more powerful the sadder she gets, and Asakim seeks to awaken its true potential by tormenting her. It's also the thing responsible for transporting her randomly throughout the dimensions. She resolves to thwart Asakim's ambitions (and later the Chimera Battalion), but discovers the more she uses the Sphere's power, the more she's losing herself: first her sense of taste, then her sight...poor girl.

Setsuko pilots the Virgora, formerly one of three test units, each with specific weaponry and combat roles, but gathers up/unlocks all weapon outloads for one. Later, it's upgraded a second time to the Virgora Glory. She embodies these tropes: 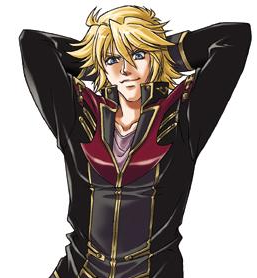 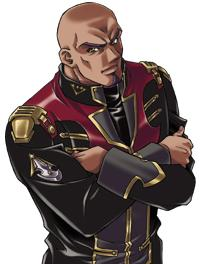 A special operations unit of the New Earth Federation headed by Colonel, later, Brigadier General Edel Bernal, their mission is to unite the chaotic world after the dimensional collapse, but are also intent on ruling the world as a totalitarian dictatorship by controlling all information through the Universal Network (read: the Internet). Using the UN, they feed ZEUTH false information about each other in an attempt to trick them into destroying one another. Naturally, it becomes clear the Chimera are the primary antagonists of Z.

Tropes common to multiple members of the Chimera are: 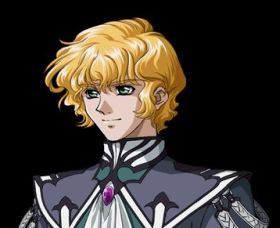 Don't trust that smile too much...
Voiced by: Isshin Chiba

A very dedicated soldier of the Chimera, Löwen has issues against hitting women and fighting them on the battlefield, less out of misogyny and more out of chivalry. Calling himself "The Young Lion of the Chimera", he pilots the Chaos Leo, a mecha that looks like a man wearing lion hide with vicious melee attacks. As the Chimera reveal their true colours, so does Löwen: he despises women, and believes the only woman who should be allowed to exist is his commander Edel Bernal, whom he worships like a goddess. The reason for this is the vague explanation of "I was betrayed by women before". Löwen dies pathetically screaming out Edel Bernal's name as his Chaos Leo is destroyed. Löwen embodies these tropes: 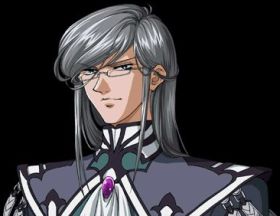 A member of the Chimera and Löwen's closest friend, Schlan is a highly professional, skilled pilot, and a very cunning man specializing in data collection and intel. Unlike Löwen, Schlan never joins ZEUTH officially, so the player never gets to use his machine Chaos Anguis (until Z: Special Disk), a humanoid mecha with a pulse rifle that can transform into a giant cobra. When the Chimera's true intentions are shown, so does Schlan, who admits he's a cold, sadistic killer that does not panic even when he loses, only remarking he has gathered valuable data. He still values his friendship with Löwen though, and they truly do have a lot of affection for each other. Imagine his disappointment when he learns although Löwen might hate most women, he does not have interest in the other sex, either. This is because Schlan has a gay crush on Löwen, and really goes towards the deep end after Löwen dies. He is killed soon afterwards by ZEUTH.

Schlan is primarily responsible for feeding the false intel that almost caused ZEUTH to destroy itself, and he likes to gloat about it a lot. Schlan embodies these tropes: 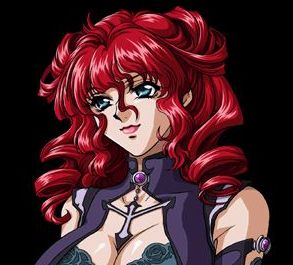 This is as work-safe as we could get for a photo
Voiced by: Rie Saitou

An ex-leader of a Windam squad that supposedly gets itself wiped out due to a freak explosion thanks to the "Break The World" event (In Name Only from Mobile Suit Gundam SEED Destiny; Z uses it from Super Dimension Century Orguss), Xine is the Sole Survivor and is found by the Chimera; without much to do, she aligns with them, is given a mecha and for the first part of Z acts as a bitch towards ZEUTH. However, it's revealed she's simply lonely (as the members of her old unit are indeed dead, but are entombed within the Scab Coral that's spreading across the planet) and has nowhere to go. If the player is lucky, they can convince her to desert the Chimera. She falls in love with Asakim and madly blushes (Squicky or not: you decide) whenever he's around. Asakim later abandons her, but tells her to live free. 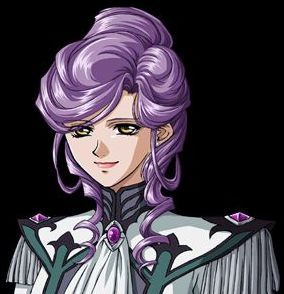 A beautiful woman with a demeanor that would make the Virgin Mary seem smutty, Edel Bernal's the young leader of Chimera, with the rank of Colonel at first, later promoted to Brigadier General. She had a lover who died a while ago during some unspecified war, likes wild and macho men, drinks a rose/chamomile blend tea, and wears a negligee at night (information courtesy of That Other Wiki). Her personality and position made her a natural maternal figure for the chaotic world after the dimensional collapse, and Edel's determined to bring about an era of peace and stability following the bloodshed of the wars...

...At least, she would like for you to think that: Edel's actually an ultra-bitch who considers herself God's gift to humanity and superior to everybody else. She would have loved nothing more than to take her "rightful" place as absolute ruler of the world. Obviously, ZEUTH wouldn't have any of this, and proceeds to overthrow her, even while the entire world's fed propaganda painting them as terrorists. Edel's eventually pushed back and attempts to kill Eureka in order to take ZEUTH down with her. Imagine to everyone's surprise when "The Black Charisma" appears in a Lemures and unceremoniously kills her.

Edel Bernal pilots the Lemures, the pinnacle of Chimera technology (at least, what she assumed was the peak). She embodies these tropes: 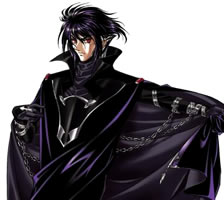 Totally Not- Masaki
Voiced by: Hikaru Midorikawa
"My past, my sin, my fate, and finally...MY DESPAIR!!"

A mysterious man clad in black, Asakim seems to be one of his own agenda. Noted for his sadistic, psychopathic tendencies, he seemingly targets Setsuko to make her suffer and gain something from her dimensional gate opening capabilities. He also uses Rand for his own benefits later, though for some reason in Rand's story, he comes off as amiable towards him.

Asakim reappears in Hakai-hen as the only recurring Z original. He assists new protagonist Crowe in the first half of the game from time to time, as all of the characters are from a different setting from Z and they don't know anything about Asakim. He tries a similar plan he previously attempted with Rand by getting close to Crowe, then stabbing him in the back later. Fortunately, he's stopped preemptively when members of ZEUTH make an appearance in the ZEXIS world, and Amuro Ray immediately attacks and drives him off, and proceeds to inform Crowe of his atrocities against Rand and Setsuko

. He reappears in Saisei-hen after realizing the Sphere he obtained from Aim Liard was a fake and destroys Aim by using his own Sphere

of the "Truth-Seeking Goat'', making him unable to resurrect himself from death, while Uther Insaraum, the King of Restoration, finishes Aim for good.

If there's anything to note, Asakim's almost the antithesis of Masaki Andoh: Emo instead of Hot-Blooded, evil instead of good...and there's his mecha Shurouga, considered the "Anti-Cybuster": clad in black, has similar moves ("Discutter" to "Discalibur" (and "Vanity Ripper" to "Integral Discalibur"), "Cyflash" to "Embrace the Inferno", "Hi-Familiar" to "Tragic Genocider" (and "Tragic Carnager"), "Discutter: Ranbu no Tachi" to "Rumbling Discalibur", "Akashic Buster" to "Ley Buster", and "Cosmo Nova" to "Genosic Nova"), but darker and more sadistic. Tropes associated with him and the Shurouga are: 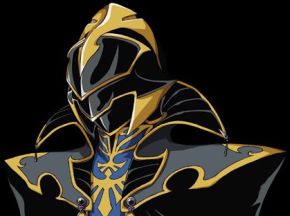 This is the best, non-spoiler image of this nutcase that we can come by; we apologize.
Click here 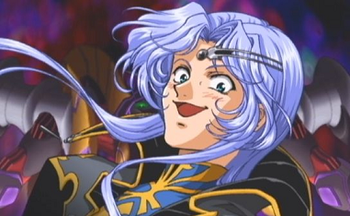 to see the spoiler unmasked version.
Voiced by: Daisuke Hirakawa

The Edel Bernal is an amalgamation of three different identities taken on by the same being: "Jie Babel", a hideous looking Mad Scientist working for the Chimera who gets off from being beaten by Edel Bernal, "The Black Charisma", a mysterious masked man who goes from place to place to manipulate events to an indefinite goal and "The Edel Bernal", a blue-haired Bishōnen. The Edel Bernal caused the dimensional collapse and various wars resulting from that for one and only one purpose: he thought it would be really fun. To that end, he's defeated and dies happy with no regrets, laughing all the way after having the time of his life.

...at least until he reappears again after ZEUTH believes he's defeated for good, and the confrontation between him and the protagonist at this point incites a reaction between their mecha's respective power sources that ultimately destroys his soul.

Being a Reactor of an artificially-created Sphere, derived from analysis of a real one in the chosen protagonist's mecha, The Edel Bernal has the ability to play with the "Origin Law", thus incorporate versions of himself from alternate realities, as well as summon them. He pilots the Chaos Lemures, the pinnacle of the Chaos machines the Chimera use and, depending on who the main character is, will either be fought as one enemy with large HP and an endless supply of mooks or three enemies with slightly less HP that must be defeated in the same turn. The Edel Bernal embodies these tropes: