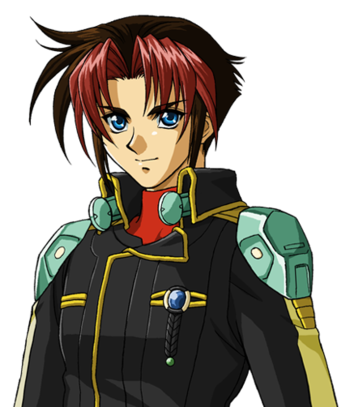 Male protagonist of Reversal, Raul Gureden is a test pilot of the Excellence machine installed with the Time Flow Engine. He is partnered with Wrench Wench Mizuho Saiki and good friends with the energy Otaku Raji Montoya. His story differs depending on Continuity.

In Reversal, Raul lives in a Crapsack World where events like Mobile Suit Gundam: Char's Counterattack or Martian Successor Nadesico: Prince of Darkness is on the air. Trying to promote the Time Flow Engine, he enlists his team to the Ra Cailum or Nadesico, but at one point meets the enigmatic Duminuss, who wants the Engine for its own purposes. Attacking the Excellence crew, the Engine is damaged enough that it opens a wormhole, transporting them to the past, but before the events that occurred which turned their world into a crapsack. After doubting that any changes will preserve the future, Raul declares maybe a Temporal Paradox won't hurt, if it's to fix the Bad Future, thus works with the Round Knights to ensure events will not trigger to cause the worst outcome. Duminuss continues to target him and the Engine, but its death throws Raul and his company back to their time, now brighter and sunnier because of his efforts to fix the past.

In Super Robot Wars Original Generation 2, he hails from the same world as the Shadow-Mirror, with a younger Half Identical Twin sister named Fiona. In the prologue, the team's sought by the Shadow-Mirror, but continues to elude them, until Lemon Browning sends Axel Almer to retrieve the Time Flow Engine. He proceeds to disable Fiona's Excellence when Duminuss appears and sends an attack at Raul. Fiona takes the shot, but the shock of the attack causes the Engine in her unit to go haywire and open a dimensional gate, sucking the siblings in (fortunately for Axel, he eludes it). Raul, Raji and Mizuho wind up transported to the Original Generation universe and align with the Earth Federation Army (with some help from Gilliam Yeager) at the height of the war with the "Inspectors" and the "Einst". Following the conflict, Raul, Raji and Mizuho join the crew of the Kurogane battleship, with hopes they might find Fiona.

Six months later in Original Generation Gaiden, during a clash between Kouta Azuma and his Brainwashed and Crazy sister Shouko Azuma as "Dark Emi", the energies from their respective "Compatible Kaiser" and "G-Thundergate" trigger a wormhole with Fiona and her Excellence coming out from it. While Raul catches up Fiona with current events, Duminuss kidnaps Raji and Mizuho; in response, he and Fiona take their machines to battle the creature and rescue them both. Raul's story ends with him dismantling the Excellence and the Time Flow Engine, citing the latter too dangerous and something like Duminuss will come again with hopes to seize the Engine and misuse it. Opting to open a junkyard/mechanic shop called "L&E Corporation", Raul continues to become a test pilot for Mizuho's new rescue-oriented robotics. Despite not actively taking to the battlefield again, Raul continues to help the Earth Federation Army in the Second Original Generation.

Things change drastically in The Moon Dwellers when the Federation came face to face with the Fury, who were able to stop time. In order to give the Federation a chance, Raul takes the risk of rebuilding the Time Flow Engine and another set of Excellence unit for him and Fiona, even if it may one day bring forth something similar to Duminuss, or worse.

The modular-based Excellence in all appearances comes with a full set of frames changeable to adapt to any situation/terrain. In either Continuity, after Mizuho and Raji are captured by Duminuss, Raul acquires the super robot Excellence "Lightning" as a final upgrade. For the Second Original Generation, despite having dismantled the Excellence, Raul returns with the new Excellence "Rescue", a designated support unit. However, in The Moon Dwellers, eventually Raul rebuilds another Excellence with Time Flow Engine, with a brand new frame "Gunstriker". 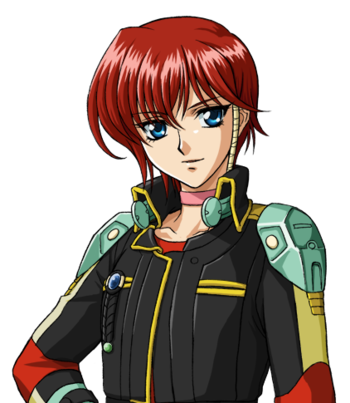 The heroine of Reversal, Fiona Guresen starts as Raul's Distaff Counterpart, meaning her story's the same as his in Reversal, yet they cannot co-exist together. Don't expect Fiona to be into Girls' Love for Reversal, since she has a steady relationship with Raji, where she believes her status as a test pilot hinders his research with the Time Flow Engine. Original Generation turns her into Raul's younger twin sister and unlike Raul who takes his business seriously, Fiona's much more laid back and a tease, with a penchant of reminding her brother she's his younger sister, despite him claiming it shouldn't make any difference, since they're...well, you know...twins.

Her story starts out the same as Raul in Original Generation 2, but after being thrown into the inter-dimensional gate, Fiona vanishes and isn't seen again. Come Original Generation Gaiden, when the clash between the Compatible Kaiser's "Overgate Engine" and the G-Thundergate opens up a wormhole, out pops Fiona, starving and still injured from taking the attack meant for Raul by Duminuss. Thanks to the interference of Axel and Einst Alfimi, Raul hauls her for medical attention aboard the Kurogane. After being caught up with the fact she's in an Alternate Dimension and learning Raji and Mizuho are kidnapped by Duminuss, Fiona takes to the battlefield to assault Duminuss and continue to be at her brother's side. With Duminuss defeated, Fiona dismantles her Excellence, agreeing the Time Flow Engine is still yet an unstable piece of technology, and opens the L&E Corporation with Raul as another test pilot for Mizuho, although Doctor Marion Radom states she wants to build something for Fiona that's better than the Excellence.

Fiona starts with the same Excellence machine like Raul, however her final upgrade is the much more feminime-looking "Excellence Eternal". Fiona embodies these tropes (some of them are shared with Raul, though): 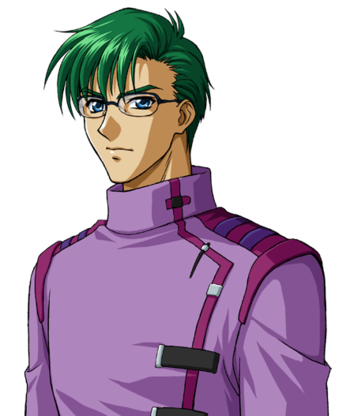 Raul's scientist friend who created the Time Flow Engine, Raji Montoya's an Otaku about energy sources and usually accompanies Raul in his endeavors, but in Fiona's scenario for Reversal, he's her Love Interest and a big source of Fiona's Wangst. In either Continuity, he's kidnapped with Mizuho to create a new Time Flow Engine for Duminuss, but sabotages it at the last second to give Raul/Fiona a chance. Exclusively for Original Generation, he becomes a sub-pilot for Raul's Excellence Lightning. At the end of Original Generation Gaiden, when Raul and Fiona decide to dismantle their Excellences, Raji doesn't entirely abandon his continuing research to the Time Flow Engine, but he does intend to one day discover the Engine's true properties.

Not related in any way with Inigo Montoya, nor did he say that, nor were his parents killed by Duminuss and neither does he say "Prepare to Die". 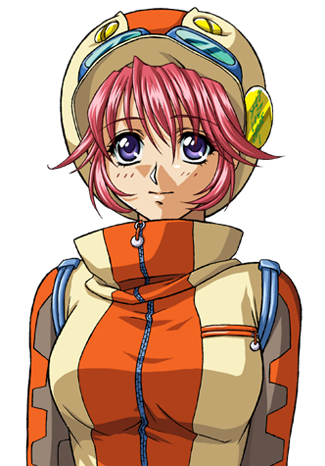 The other friend of Raul, more specifically his girlfriend (or not, as he insists), Mizuho Saiki's responsible for the creation of the Excellence machines and their various frames, built on the basis that her parents died after a disaster and she wanted to create a rescue-based unit. Irony ensues because of the military demands in their world, thus she winds up arming the Excellence instead. Unfortunately for players, if Fiona's the protagonist for Reversal, don't expect any Les Yay. Usually seen next with Raji as a pair developing the Excellence, and in either Continuity, she's kidnapped with him by Duminuss. Exclusively for Original Generation, she becomes a sub-pilot for Fiona's Excellence Eternal.

In General
The antagonists of Reversal, this group consists of a giant pink blob-thing and its three homunculi children. Tropes common among all of them are:
Duminuss Duminuss is the mysterious entity in Reversal who claims it killed its creator (it could possibly be a she because of its voice actor in Original Generation, but due to the lack of a specific gender, this page will simply designate Duminuss "genderless") and wonders about its purpose and attempts to find the answer. When Duminuss stumbles upon the Time Flow Engine, it tries to seize that with hopes to return to a point in the past and ask its creator about its purpose. Throughout Reversal, Duminuss is assisted by three homunculi it created.

In Original Generation 2, Duminuss makes its appearance in the Shadow-Mirror universe and heads an attack on the Gureden siblings, unknowingly damaging Fiona's Excellence and its Time Flow Engine. The next time it appears is in Original Generation Gaiden, where-in Duminuss destroys Wilhelm von Juergen and commandeers the "ODE System" for its use. In this setting, Duminuss has acquired the "Emi Armor" and G-Thundergate, forming an uneasy alliance with the "Shura". As help for revealing the inner workings of the "Swordian Fortress", Duminuss demands they kidnap Shouko Azuma, Brainwashing her to become Dark Emi via the Emi Armor and use the G-Thundergate to antagonize "Fighter Roar", Kouta's Henshin Hero alter ego. All this is so Duminuss can gather parts of the "Twelve Keys" to summon its master Dark Brain into this dimension.

For the duration of Reversal, Duminuss can take on three forms: "Proton", "Deutron" and "Triton". Original Generation Gaiden tosses out the Deutron form and has Duminuss transform into its Triton form. Tropes associated with Duminuss: The pink-haired homunculus of Duminuss, Tis is the leader of the three. Impulsive and hot-headed, Tis is super sensitive about the size of her breasts (in fact, her wish if she ever gets revived is to get a body with larger ones). In Reversal, Tis makes contact with the "Gaizock Empire" for an alliance; in Original Generation, she sends the "Space Flounders" against the Hiryu Custom battleship, as well ensuring the G-Thundergate is still in their possession.

Her mecha is called the "Durgatel", which is always accompanied by the "Pater". Tis embodies these tropes: The blue-haired homunculus of Duminuss, the chronically and painfully shy Despinis is charged with keeping control of those brought Back from the Dead by Duminuss. When that character is freed, she handles the job of observing the construction of the second Time Flow Engine by Raji and Mizuho in Reversal.

Despinis is seen with her mecha "Ereos" in combat. Tropes associated with her include: The only male homunculus, Laliar serves as the middle ground between Tis and Despinis. He contacts "Neo Zeon" in Reversal and takes a more active stance in combat. In Original Generation Gaiden, Laliar rarely heads to the battlefield and largely shafted to the sidelines.

In the instances he does fight, he uses the machine "Hypocrisis". Tropes associated with Laliar: