This character sheet comprises of those who make their debut in Super Robot Wars Alpha Gaiden.

In General
The Ancestors are the primary antagonists in Alpha Gaiden. Formed by the twisted Sophia Nate and calling herself "Magus", the Ancestors believe they are the next evolution of humankind using "Machine Cells", self-regenerating, self-replicating Nanomachines that can rebuild destroyed parts from a Humongous Mecha. Magus is assisted by a fanatically Brainwashed and Crazy Sanger, as well as three clones of her dead assistant Egret Feff named "Ansuz", "Thurisuz" and "Uruz", known as the "Machinery Children". With the current state of the Earth in the Bad Future of Alpha Gaiden, they work to preserve the planet as much as they can, but having seen it being ravaged by on-going war from the surviving humans, they declare old mankind a failure and they, as the new breed, will Kill 'Em All. Their headquarters is situated in the "Earth Cradle", a facility built as an "ark" to house scientists and other survivors from the Apocalypse How that triggers the Alpha Gaiden plot.

In Original Generation, the Ancestors do not exist, and its members (sans Sanger) are demoted into a splinter faction of the Neo Divine Crusaders who break off from them post-Operation Plantagenet. The primary difference in this Continuity is Magus is not a figurehead: Egret is the faction's leader, while "Magus Gebo" is the supercomputer running the Earth Cradle. Furthermore, Original Generation establishes the facility is built by the Divine Crusaders as a contingency in the event Earth suffers an Apocalypse How. Additionally, as a parallel to Sanger from Alpha Gaiden, Wodan Ymir takes on his fanatical aspects and guards Magus Gebo using the Thrudgelmir. Other characters assisting Egret in Original Generation are Ouka Nagisa, Agilla Setme and Cuervo Cero.

The Machinery Children pilot mass-produced, Machine Cell-infected Huckebeins called "Bergelmirs", while Magus pilots the "Aurgelmir", a feminine but monstrous machine. However, only the Bergelmirs and Wodan's Thrudgelmir appear in Original Generation. Multiple members of the Ancestors embody these traits: 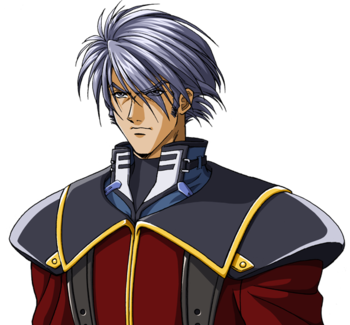 The original Sword That Cleaves/Smites Evil. Accepts no substitutes (for the most part). 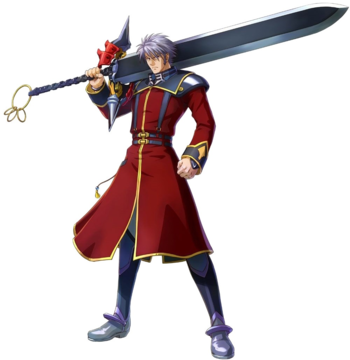 Sanger as he appears in Project X Zone
Voiced by: Kenichi Ono
"I am Sanger, Sanger Zonvolt! The Sword That Cleaves/Smites Evil!!"

Probably the most badass character Banpresto ever created, and certainly one of the most iconic, Sanger Zonvolt's an elite ace with mannerisms akin to a Samurai, including carrying a katana in hand. In the Alpha series, Sanger first appears in the bleak Bad Future of Alpha Gaiden as The Dragon to Magus, the leader of the Ancestors and the Big Bad of the game, appearing in a mutated Grungust Type-3 called "Thrudgelmir". In Alpha 2, he is the male Super Robot protagonist where his story begins with the "Earth Cradle" being destroyed by Kukuru. Sanger believes the staff is Killed Off for Real (Sophia Nate survives, while Egret Feff presumably dies off-screen) and he temporarily falls into a Roaring Rampage of Revenge, but quickly recovers (in part because the Alpha Numbers want to prevent the Bad Future of Alpha Gaiden from occurring again, knowing what Sanger could become if he's allowed to go about unchecked) and becomes a great fighting force for the "Alpha Numbers". At the same time, he begins caring for the young, mysterious girl Irui.

In Super Robot Wars: Original Generation, Sanger is a disciple of Jigen-ryuu, under the tutelage of Master Rishu Togou, and an extremely good friend of Elzam von Branstein. He is one of the founding members of the elite "Aggressors" in the past, but after the unit is disbanded, stays at the North American Langley Base to create the "ATX Team". To avoid fighting Elzam during the "Divine Crusaders War", Sanger surrenders in an ambush against the "United Colony Corps" and defects to the "Divine Crusaders". He engages against his former comrades in the ATX Team for the duration of the war until the fall of Bian Zoldark, fleeing with Elzam in the Kurogane into hiding. They reappear once Earth Federation headquarters is under attack by "Divine Crusaders Remnants", unofficially rejoining the Earth Federation Army for the "L5 Campaign" against the "Aerogaters". However, Honor Before Reason causes him to be filled with grief that he doesn't feel worthy to rejoin the team he betrayed, until Kyosuke Nanbu gives him a wake-up call.

In Original Generation 2, Sanger continues to work in secret with the Earth Federation Army and reappears when the "Neo Divine Crusaders" declare a second Civil War against the government. This time, Sanger finds a combat rival in Wodan Ymir, an agent of the "Shadow-Mirror". He also discovers the presence of Sophia and fights his way to the occupied Earth Cradle to rescue her post-"Operation Plantagenet", concluding his rivalry with Wodan. When the "Shura" invade the Earth during Original Generation Gaiden, he engages in a slight rivalry with Shura General Magnaz Ald. For the the Second Original Generation, Sanger is summoned to "La Gias" and assists Lune Zoldark and Hwang Yang Long" in the hostilities between the "Kingdom of Langran" and the "Shutendonias Alliance". Upon returning to the surface, the mysterious "JinRai" machine and the "Garden of Baral" enforcer Kukuru are the ones antagonizing him.

He also appears in the Bandai Namco Entertainment/Sega/Capcom Massively Multiplayer Crossover Project X Zone, set sometime following the Second Original Generation, where Sanger is pulled into a strange conglomeration of worlds (or parts thereof) alongside a motley crew of heroes, with at least four people (Reiji Arisu and Xiaomu and Haken Browning and Kaguya Nanbu) who strongly remind him of his former ATX Team subordinates. Following the events of Project X Zone, Sanger is brought back to the Original Generation universe by Haken and Aschen Blodel just in time for the events of The Moon Dwellers, though the inter-dimensional transporter accidentally sends Haken and Aschen along with him.

Sanger prefers a multitude of melee-based Super Robots, especially those equipped with a BFS called a Zankantou (literally "ship cleaving sword"; localized as "Colossal Blade"). Self-stylized as "The Sword That Cleaves/Smites Evil", he has a tendency to make dramatic, otherwise silly phrases and speeches, yet turn them into badass linguistics. Sanger's definitive Humongous Mecha is the "Dynamic General Guardian" (shortened to "Dygenguard"), but he's known to have used the Grungust Type-0 and Type-3. He and his mecha embody the following tropes: 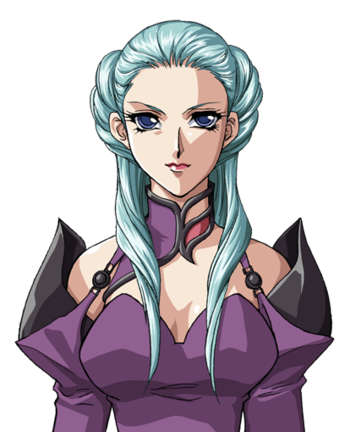 A former scientist of the Divine Crusaders, Sophia is the head researcher at the Earth Cradle. In Alpha Gaiden, using data gathered from "Zyflud" crystals retrieved from destroyed Aerogater units following the events of Alpha, Sophia is able to create the Machine Cells. For Original Generation Sophia enters hibernation in the Earth Cradle when the Aerogaters invade the Earth; however, she and many staff members are not released following the war and remain in stasis throughout Original Generation 2 until the Kurogane and its squadrons of mecha liberate the facility. As the Earth Cradle is destroyed in the assault by Federation forces, Sophia relocates to the "Tesla-Leicht Institute" as a researcher. 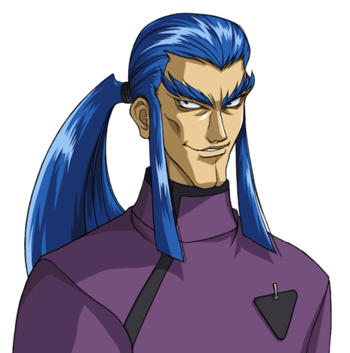 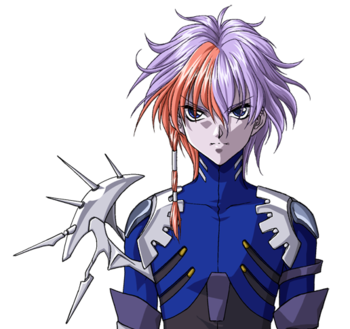 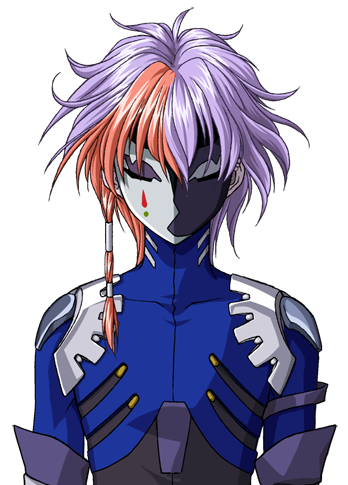 The eldest and first creation of the Machinery Children, Egret creates him in Original Generation using knowledge and know-how obtained from the "Boosted Children" of Adler Koch and Agilla, and the "W-Series" of the Shadow-Mirror. In contrast to the hot-headed Thurisuz and quick-to-judge Ansuz, Uruz is far more level-headed and calm than his brothers.