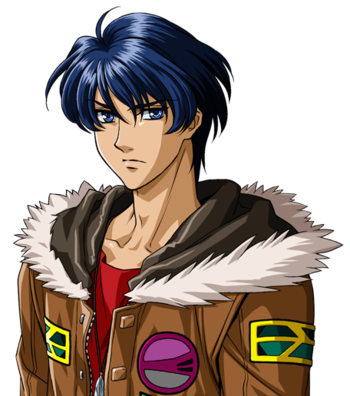 Voiced by: Yūichi Nakamura
I'm not fond of tough odds...

Male protagonist of Super Robot Wars Destiny, usually called "Josh" for short, Joshua Radcliffe's an ex-soldier, having fought against the Zanscare Empire in the past, but currently goes onto testing Humongous Mecha with his adoptive sister Cliana Rimskaya. He has mixed feelings about his father Felio Radcliffe: at one point, he dislikes him for being too much of a Workaholic; on the other hand, he respects him for the research he has done. Eventually, at a testing facility in the Antarctic, he gets attacked by the Invaders and is caught in the Ruina's plan to seal the Earth and destroy it. After learning the Ruina's appearance is indirectly caused by his father, Joshua swears to amend Felio's wrongdoings.

His story largely stays the same for the Second Super Robot Wars Original Generation: he's fought off the Einst when they invaded their Antarctic facility, becomes a close associate to Hugo Medio and is able to connect with the cold, seemingly emotionless Ruina General of Ice, Glacies, due to the "Sympathia System" built into their respective Humongous Mecha. Joshua's relationship with Felio is almost on edge throughout the game compared to Destiny: he depises his father for having Cliana as the first test subject for the Sympathia System, the cause of her developing a Split Personality, and often accuses him of relegating his children to clean up his dirty work than own up to his own mistakes.

Joshua has access to either the Real Robot "Aile Chevalier" (Mid-Season Upgrade "Geant Chevalier") or the Super Robot "Ganador" (combines with the Strega into the "Forte Gigas"). He can pilot the other mecha available in Destiny, but these two are generally accepted as his defaultnote Joshua has a higher starting melee stat than Cliana; the "blue" mecha are melee-based. Joshua appears in the Second Original Generation with his default mecha as the Aile Chevalier.

Joshua returns in Original Generation Sequel The Moon Dwellers to face "Gadisword" and the "Fury". For mysterious reasons, the Sympathia System in his machine resonates with the "Cytron Control System" of the Fury Humongous Mecha "Granteed" used by Touya Shiun. 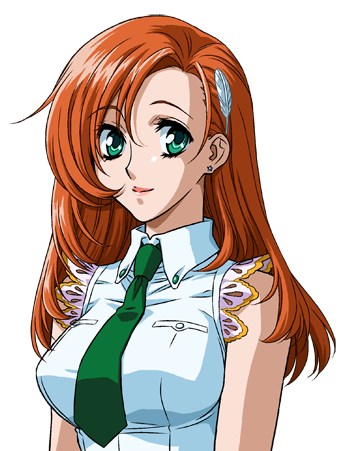 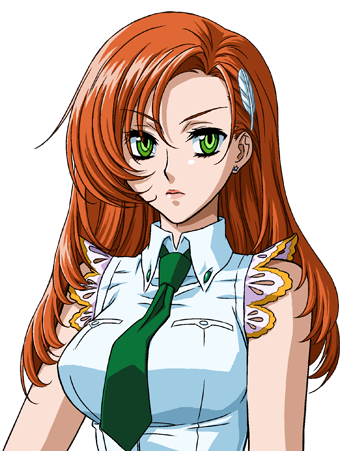 Female protagonist of Destiny, called "Rim" for short, Cliana's a sweet girl who happens to possess a Split Personality: a gentle, friendly, though slightly timid girl called "Chris", the other a stoic, battle-hardened Action Girl named "Liana". This was the result of looking through the horrors of war, but is actually a case of brutal experimentation by her adoptive father Felio when she was a child. By the time the events of Destiny begins, Cliana has already come to terms with her predicament. Like Joshua, she gets caught in the Ruina's plot and rather than sit idly by (as her adoptive brother tells her to), she takes to the battlefield, mostly as Liana while in the cockpit of her Humongous Mecha.

Her story is pretty similar in the Second Original Generation, but the experiments by Felio are absent: instead, Cliana's Split Personality is due to early testing with the Sympathia System, resulting in Chris and Liana having an odd Sharing a Body situation. Their personalities remain the same and both are amicable towards one another, akin to sisters, though neither remember which of them is the "original" Cliana. Like Joshua with Glacies, the Sympathia System in her machine grants her a near telepathic-like connection with Ruina General of Wind, Ventus.

She usually pilots the Real Robot "Blanche Neige" (upgrades into the "Dea Blanche Neige") or the Super Robot "Strega", which combines with the Ganador to form the Forte Gigasnote The "yellow" mecha have useful long-ranged attacks; Cliana starts with a good shooting stat. Cliana appears in the Second Original Generation with the Blanche Neige as her default mecha.

She embodies these tropes: 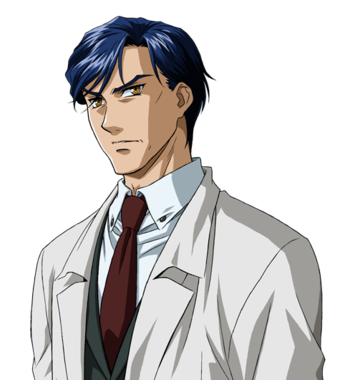 Joshua's biological father, the amoral, workaholic scientist Felio saw it fit to experiment on his adoptive daughter Cliana to further develop the Sympathia System, resulting in her Split Personality, leading to a rift between father and son. Stationed in the Antarctic as part of "Re-Technologist", a corporation designed to excavate ruins, during a trip to the "Fabula Fores" beneath their South Pole facility, Felio accidentally opened an inter-dimensional gateway, allowing the Ruina to enter the world.

In contrast to his Destiny counterpart, Felio in the Second Original Generation is less of a Jerkass; for instance, he feels guilty of having put Cliana through the Sympathia System to test out its limitations. Although Cliana is more fond of him, Joshua believes his father neglects them more because of his research for Re-Technologist. 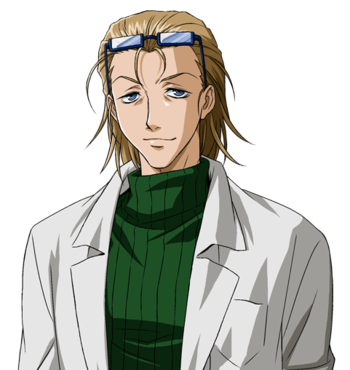 An assistant to Professor Radcliffe, Clifford Gygax is the co-developer of the "Res Arcana" Engine, a power source that taps into an unknown energy, and the Sympathia System. In Destiny and the Second Original Generation, he serves as the Mr. Exposition for Joshua and Cliana and their mechanical engineer for the Humongous Mecha they use.
Advertisement:

Based on the same galactic empire from Godmars, the Gishin Empire in Destiny conquered the planets Helios and Fleed and plan on conquering the Earth next.

November Treaty Organization
A military alliance originally founded by the Neo Zeon, which nearly succeeded with dropping the Axis colony onto Earth in Destiny thanks to the SMS coup d'etat. However, Earth's sudden disappearance caused Axis to break apart, as well as causing half of its fleet to vanish. Now faced with the Zanscare Empire invading, the reemergence of the Invaders, the arrival of the Protodeviln, the combined galactic Gishin Empire, and the forces of Ruina, Neo Zeon negotiates with the captured Amuro and Bright for a ceasefire to combat the combined threat.

After the death of OZ's leader, Dermail Catalonia, and the reappearance of Earth, the loose alliance expanded to include the League Militaire, remnants of the UN military (including various Super Robots), OZ (now led by Treize Khushrenada), the Macross 7 Fleet, and MZ23.

In General
The primary antagonists of Destiny, this interdimensional race feeds on negative emotions: when they gather enough power, they can use it to annihilate a universe, and if they are around a Crapsack World...well, one can guess what happens. Led by Perfectio, they're brought to the universe by Felio, who accidentally opened the gate to their world and they end up possessing him and his co-workers in Destiny. In the Second Original Generation, with the exception of Felio (whom Perfectio possesses), the Ruina are born from Felio's knowledge and memories. The Ruina Generals, or "Melior Esse", are created by Perfectio from human hosts assisting him (the Melior Esse are instead Artificial Humans in the Second Original Generation).
Aquila 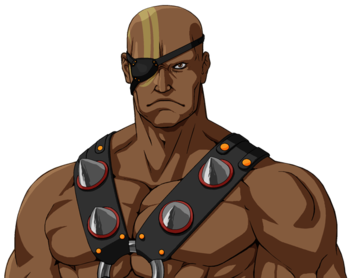 The Ruina General of Sky and pilot of the Fortes Ala. 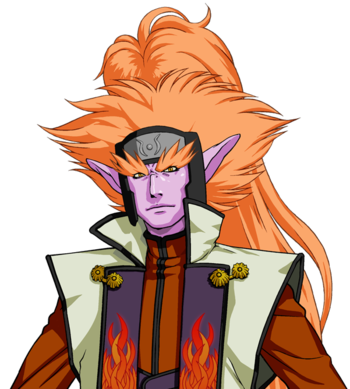 The Ruina General of Fire and pilots of the Impetus, Ignis is the first of the Melior Esse in Destiny to appear and revels in making people hate him, as anger is what empowers him, including killing someone close to one of the heroes. In the Second Original Generation, Ignis' personality stays the same: while he harbors little care and concern for his Ruina allies, he has a notable soft spot for Glacies as they were "born" on the same day, and is rather crushed to discover her pulling a Heel–Face Turn to join Joshua. When Ignis dies, he calls out her name in sorrow. 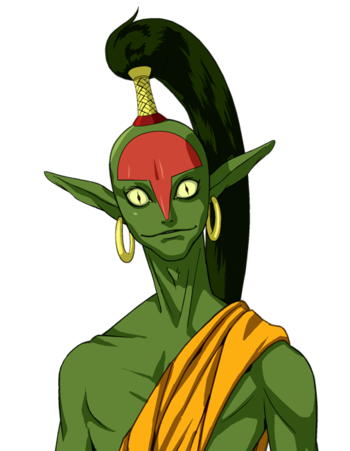 The Ruina General of Disease and Plague and pilot of the Violaceum, Contagio is the most non-human in appearance of the Melior Esse. He appears midway through Destiny and the Second Original Generation and introduces the Skullplume Mooks. 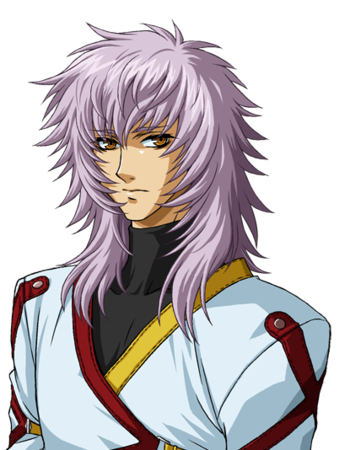 Ventus post-Heel–Face Turn
Voiced by: Kenji Nojima
This constructed life is the same, but even when it comes to death I still have no freedom.

The Ruina General of Wind and pilot of the Studium, ventus is considered a defective Melior Esse amongst the Ruina and mostly abandoned by his peers. In Destiny, Ventus exclusively appears if Cliana is the headlining protagonist of the game. While Ventus is potentially recruitable in Destiny, by doing so, players permanently lose Joshua and his Humongous Mecha for the rest of the game. In the Second Original Generation, Ventus is a more active Melior Esse: he is a control device used by the Ruina to harness negative waves around the world, acting as a form of "energy channeler" for Perfectio. Unlike his Destiny counterpart, Ventus defects by default and joins the Steel Dragon Battle Group, as he believes Cliana has saved him from a life of nothingless and purposelessness. To ensure Perfectio cannot enter Earth again, Ventus deliberately volunteers to seal Perfectio from the other side of the Cross Gate in the Fabula Fores. 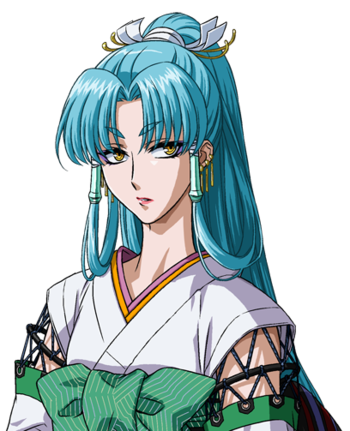 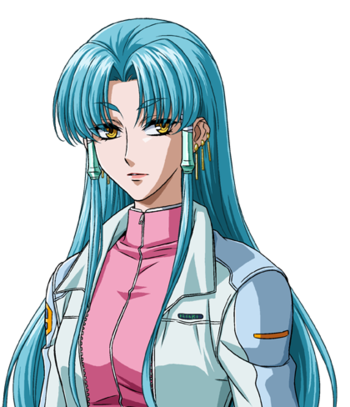 Glacies post-Heel–Face Turn
Voiced by: Yuka Komatsu
All that possess a soul, all that inhabit a body of flesh, shall be guided down the path of destruction, unto the depths of anguish. All for the "King of Ruin".

The Ruina General of Ice and pilot of the Fabularis, the cool and mysterious Glacies appears only if Joshua is the headlining protagonist of Destiny. Like Ventus, players can recruit her, but it renders Cliana leaving the party permanently for the rest of the game; in the Second Original Generation, the Heel–Face Turn occurs regardless. In all appearances, Glacies is the only Melior Esse to have the strongest connection with a human, due to the Sympathia System in her Fabularis corresponding with the system in Joshua's machine, allowing both of them to share parts of their consciousness with each other. As she unwillingly interacts with Joshua more, she begins developing her own form of empathy and humanity, finally making the decision to live for Joshua's sake when she is discarded by the Ruina when they consider her budding emotions to be a sign she is "broken". At the end of the Second Original Generation, Glacies stays with Joshua and Cliana to assist in the Federation's further research on the Cross Gate in the Fabula Fores; however, Clifford estimates she has roughly three years to live due to her artifically-created body. 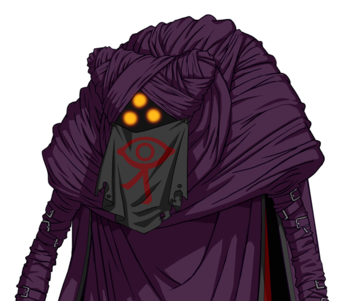 Voiced by: Hiroko Uchida
Thy tears of sorrow and crimson lifeblood are as the finest wine, and thy moans and sonorous cries shall be the most sublime melody.

The Ruina General of Darkness and pilot of the Priscus Nox, Umbra is the last of the Melior Esse to appear in Destiny, and the only other female Ruina General besides Glacies. 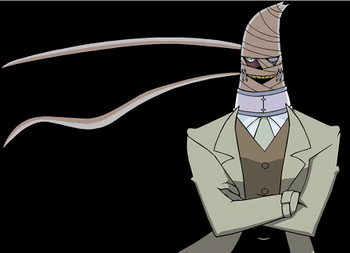 Pilot of the Big Duo, he is same-named character from The Big O. In Destiny, Schwarzwald joins the Ruina due to having gone mad from coming into contact with them. 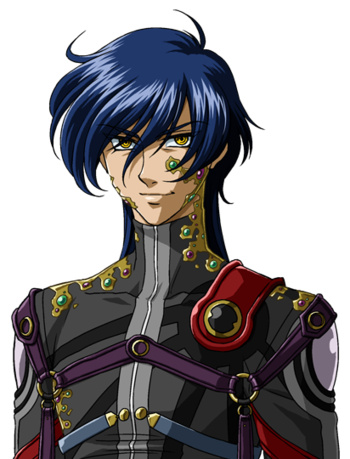 to see Perfectio's appearance (warning: spoilers).
Voiced by: Toshihiko Seki
I am Destruction. I am Chaos. All things shall be erased. I am that which drives this infinitely expanding universe back towards the perpetual darkness of its origin.

The leader of the Ruina, Perfectio is a being that feeds on hate and ruins many dimensions in order to be satiated. Released accidentally onto Earth by Felio, who Perfectio proceeds to possess, it kickstarts the eventual Ruina invasion by sealing the Earth. As an entity composed on hate, Perfectio is immortal and cannot be destroyed: in Destiny, Treize Khushrenada sacrifices his life by pushing Perfectio back to its realm, sealing the both of them together there. In the Second Original Generation, Ventus does this in the latter's place.