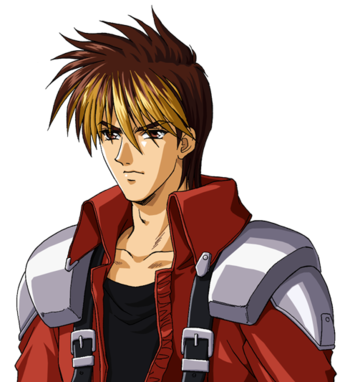 You should probably bet on the tough odds that you'll see his derivatives a lot.
Voiced by: Toshiyuki Morikawa
"I don't mind betting on tough odds!"

Making his debut in the lowly Compact 2 trilogy, Kyosuke Nanbu proved popular enough his game gets updated into Impact and becomes another protagonist for the first Super Robot Wars: Original Generation, though his route becomes non-canon (the second half of it, anyways). Kyosuke's grumpy with a bad life-or-death gambling habit, who takes war seriously. His partner's the extremely cheery Excellen Browning, who becomes a good Foil for his stoicism, for good reason: without her, he may as well become too grumpy like his Evil Twin Beowulf in the "Shadow-Mirror" universe. He also has an unnatural streak of luck: in the past, he was one of two shuttle crash survivors, coming out with just minor bruises and scratches. While usually calm, he has a Berserk Button: go ahead and endanger his woman and he becomes a Determinator with a dangerous Tranquil Fury.

In Original Generation, Kyosuke's the new recruit to the "ATX Team", selected by Sanger Zonvolt, but after Sanger's Face–Heel Turn, he's promoted to team leader and proves himself to be equally as good as Sanger in the role that the change is permanent. His biggest contribution in Original Generation 2 is during the war against the "Inspectors" and the Shadow-Mirror, wherein he becomes The Rival to Axel Almer. At the same time, he's also targeted by the "Einst", especially Einst Alfimi, but he and Excellen manage to persuade her to turn against her creator. The events in Original Generation Gaiden puts Kyosuke into Heroic BSoD for three times, due to his apparent failure to protect his a friend. Thankfully, Axel (who by this time gets a Heel–Face Turn) manages to set him straight after a Dynamic Entry rescue on the latter.

Sometime after Original Generation Gaiden, Kyosuke disappears in a dimensional rift during a live-fire training exercise with Ryusei Date, ending up in the world of "Eria". After their misadventure, he disappears to who knows where, though it turns out he's transported into the subterranean world of "La Gias", meeting up with old comrade Lune Zoldark and the Herald Hwang Yang Long, alongside multiple members of the "Steel Dragon Battle Group" in the Second Original Generation. With the events in La Gias solved, Kyosuke and his allies return to the surface world, only now their newest enemies are the "Gaia Sabers", "Garden of Baral" and "Ruina". This time around, he takes a more sidelined role.

◊" and its Mid-Season Upgrade "the Alt Eisen Riese

◊", all that adheres to the Rule of Cool (so heavy it needs a "Tesla Drive" to stand up, and he's the only one who can use the Alt). They embody these tropes: 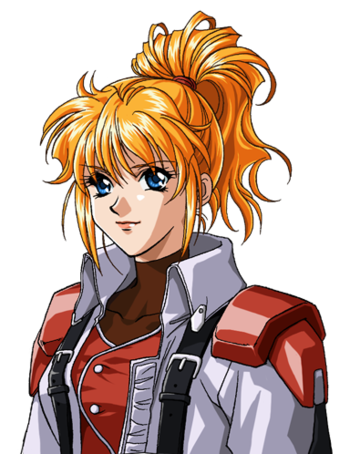 Not pictured: A bunny suit that she'd so love to show it off to you and expecting your flustered reaction.
Voiced by: Yuko Mizutani
"Cheer up, nobody says you suck...even though you do."

The extremely cheery Ms. Fanservice partner and complement to Kyosuke, and his girlfriend to boot, Excellen is majorly flirty, loves to tease everyone, usually the one who brings the party together and totally devoted to her boyfriend. She's not an Otaku, but has a hint of geekiness intact, making plenty of Shout Outs here and there. She also loves acting like a Cool Big Sis towards anyone younger than her. Excellen's origins are not pleasant: she was in the same shuttle accident that claimed the lives of all its passengers except her and Kyosuke. Years later, after being part of the army (Sanger's ATX Team in Original Generation), it turns into coincidence Kyosuke is selected to be part of the same unit as her.

In Original Generation 2, Excellen befriends ATX Team newcomer Lamia Loveless, who showcases her traits as a Cool Big Sis towards her, making Lamia call her Ex-neesama ("Ms. Excel" in the localization) since Lamia's so clueless about human personality given her Robot Girl nature. Throughout Impact and Original Generation 2, Excellen is hounded by Einst Alfimi, a human-Einst clone of her who wants to bring her to the Einst, leading to a situation where she does get kidnapped by the Eldritch Abominations and Brainwashed as their servant. Fortunately, Kyosuke and his allies break her free from their control. At the same time in Original Generation 2, thanks to the Shadow-Mirror having a hand in the events of the game, Lemon Browning, who shares Excellen's surname, also antagonizes Excellen, claiming she knows everything about her.

After Original Generation 2, Excellen continues to accompany Kyosuke, doing her best to be his moral support, When the events of the Second Original Generation unfold, Excellen is transported into La Gias, temporarily being a "gang leader" for the bandit Gold Bagold until Masaki Andoh raids the bandit hideout, forcing Excellen out of hiding, reuniting and helping him and his allies during the "Langran Civil War", before returning to the surface, only to contend with new terrestrial and aliens threats. Over time, Excellen forms a bond with Ariel Org and at the end of the "Sealing War" in the Second Original Generation, welcomes Ariel as the newest member of the ATX Team.

◊" until it gets upgraded/mutated into the "Rein Weiss Ritter

◊". They embody these tropes: 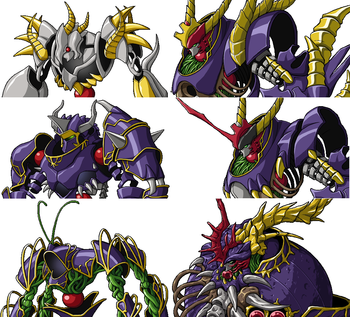 The main antagonists of Compact 2/Impact, the Einst claim to have been around since the beginning of time, acting as the guardians of the universe and eliminate those they consider a threat to the natural order, recreating life from the ashes, if necessary. It just so happens they pick the universe where the heroes live in. To initiate their Adam and Eve Plot, the Einst create Einst Alfimi, a clone of Excellen, to have her sire a new mankind with Kyosuke, but their plans are undone when Alfimi turns on her creators and joins her human allies to destroy them instead.

Tropes regarding the Einst include: 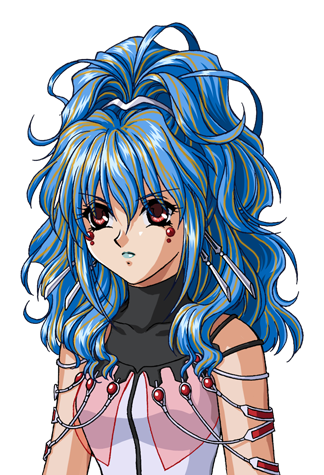 Created exclusively for Impact, when the Einst declare humanity needs a reboot via their own "Adam and Eve" to make the planet grow again after they destroy it, the Einst create a clone out of Excellen, but instead of being a Manic Pixie Dream Girl Hard-Drinking Party Girl, Einst Alfimi is an Emotionless Girl. For much of Impact and Original Generation 2, Alfimi attempts to persuade Kyosuke (the Einst's chosen "Adam") to join her and the Einst, but his consistent refusal forces her to capture Excellen instead, hoping this will be the way to goad him to agree with her. After Kyosuke and his allies free Excellen from the Einst's Brainwashing, they pull their own persuasion for Alfimi to break out on her own from her Einst creators. Not only does it work, but she helps them defeat the Einst. Unfortunately, as Alfimi's existence is tied down to the Einst, destroying the Eldritch Abominations inevitably destroys her as well. Alfimi fades away, dying she is thankful she has made friends.

Alfimi pilots the very scary-looking Einst mecha "Persoenlichkeit" (shortened into "Lichkeit" for the localization due to space restrictions). Tropes associated with Alfimi: