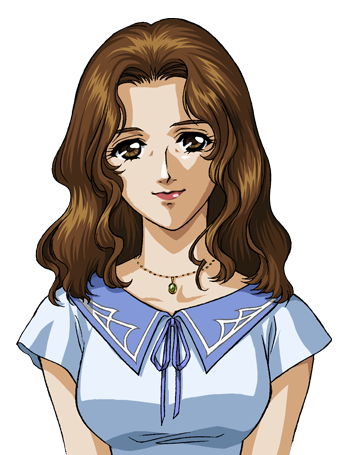 The sickly mother to Ryusei Date, Yukiko Date spends much of her time in the hospital. In order to cover the medical bills, Ryusei joins the military, who agrees to pay all the expenses incurred. 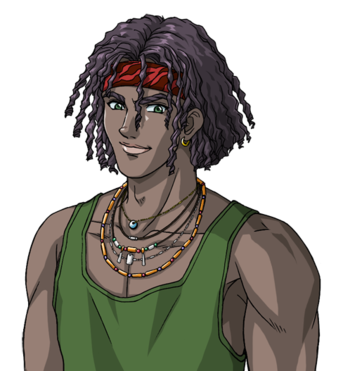 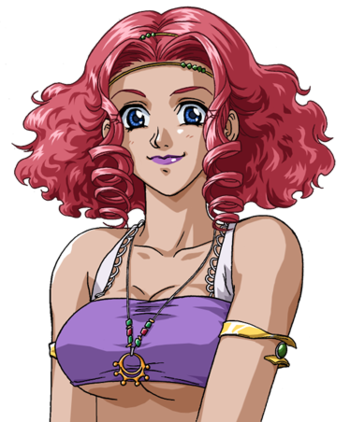 A pair of ex-Second Lieutenants of the "Earth Federation Army", Giado Venerdi (Giada in the original Japanese version) and Garnet Sandi are a pair of fighter pilots before moving onto using Humongous Mecha. Giado's a music aficionado, while Garnet was formerly a model; unlike her boyfriend, Garnet loves interferring in other people's relationships or attempt to get two people together, despite the often strict fraternization rules in the Earth Federation Army. Together, Giado and Garnet found a young girl abandoned and left to die in the wilderness sometime before Original Generation, taking her in and giving her a name. With the end of the "L5 Campaign", the two retire from the military and get married. As of Original Generation Gaiden, they are Happily Married and the parents to twins Alec and Sandy 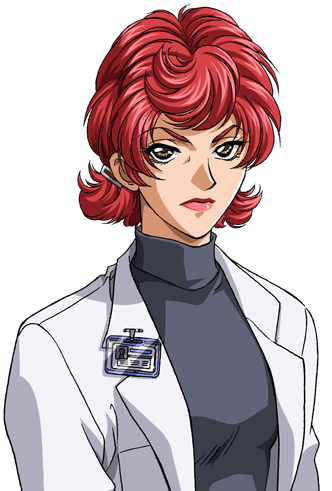 A former mechanical designer at major Humongous Mecha manufacturer "Mao Industries", Doctor Marion Radom left for the Tesla-Leicht Institute and became one of its most skilled developers. Thoroughly stubborn and Brutally Honest, she is one of the people responsible for the development of the Real Robot "Gespenst" and the lead engineer and mechanical designer for the "ATX Team". 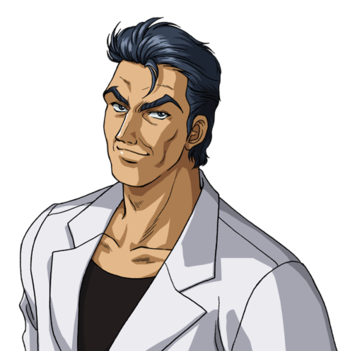 Head researcher and director of the "Tesla-Leicht Institute", Jonathan is the single father of Irmgard Kazahara. Much like his son, he loves to flirt with women. Jonathan is the creator behind the "Grungust" Super Robot series and helped Filio Presty design the flight-capable "Tesla Drive". 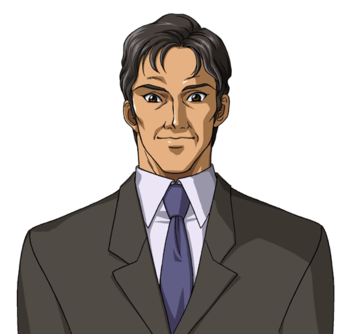 Voiced by: Takeshi Ooba
Director of Mao Industries located on the moon, Yuan is the father of Rio Mei Long.
Mitsuko Isurugi 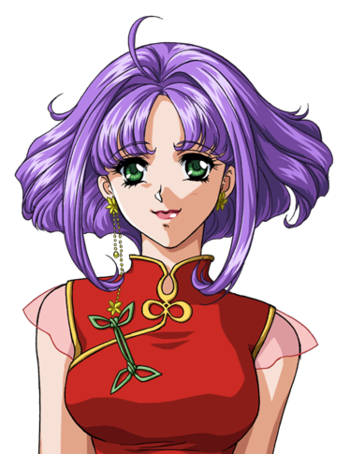 Current president of "Isurugi Industries", Mao Industries' competitor as a Humongous Mecha developer/manufacturer, Mitsuko will promote anything from her company's assets with hopes to make the highest profit. Contrary to her gentle demeanor, she has a hidden agenda, providing support to the strongest side if need be.

The wife of Elzam von Branstein, Cattleya is greatly admired by his Elzam's younger brother Raidiese Branstein and cousin Leona Garstein during her time with the Branstein family in the "Elpis" space colony. 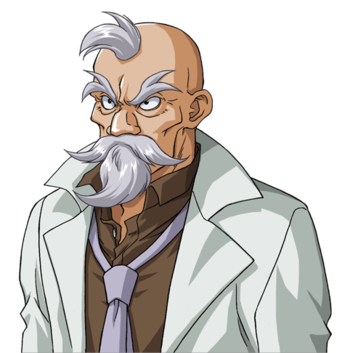 A former member of the "Extra-Over Technology Institute" (EOTI), Professor Kisaburo is the grandfather to Kouta Azuma and Shouko Azuma. Kisaburo encounters the entity known as "Warrior Roar", recovering his damaged Compatible Kaiser from the outskirts of "Heavy Mogami Industries" and partially restores it in an underground bunker beneath his home at Tokyo in the Asakusa district, using knowledge obtained from the "Dynamic General Guardian" series since his time at the EOTI. Although he bears the name to the same-named professor back in The Great Battle, it's unlikely he's the same person to whom Warrior Roar has allied with against the Dark Brain. 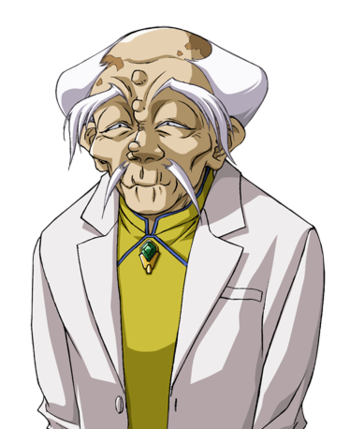 An ex-member of the EOTI, Eric Wong is part of the "Tsentr Project" headed by Mitall Zapad. When the "Cry Wolves" recovered the damaged Soulgain from the "White Star" back to Mitall, Eric repaired the machine and returned it to Axel Almer after he reawakens from his six-month slumber following Original Generation 2. Eric is also the one who had to modify Hugo Medio into a Cyborg, providing him a special medicine to prevent his body from rejecting his new cybernetic augmentations.

By the Second Original Generation, he is unwillingly assisting the Gaia Sabers as the Tsentr Project has been incorporated into their ranks. When Ariel Org discovers her shortened life expectancy is a result of her Artificial Human nature, Eric tells her to flee to the Steel Dragon Battle Group, knowing they might have a solution to her situation.

Due to the nature of the following character(s), spoilers are unmarked to avoid redundancy. 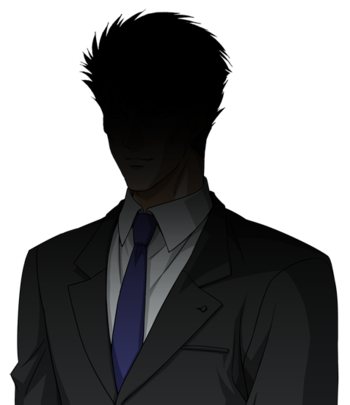 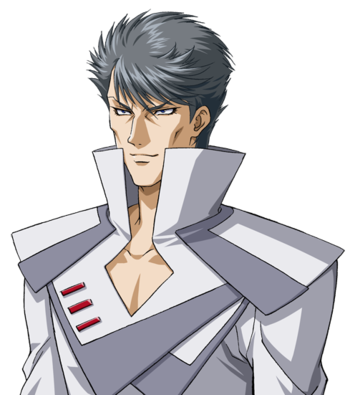 to see Arteil's appearance in the Second Original Generation.
Voiced by: Kenji Nomura

The leader of the Gaia Sabers, who works as a sponsor behind the Tsentr Project, Arteil Steinbeck is loosely mentioned in Original Generation Gaiden as a silhouetted figure before fully appearing in the Second Original Generation. Usually seen aboard the Air Christmas, flagship of the Gaia Sabers, Arteil orders his underling Amara Barton to destroy the remaining Huckebeins and steal the "Black Hole Engine" and "Tronium Engine". Following the orchestrated death of President Graien Grusman in order to discredit and frame the Steel Dragon Battle Group, Steinbeck declares his absolute authority over the Earth Federation Army, who must answer to the Gaia Sabers.

In reality, Arteil is Euzeth Gozzo, reincarnated in the Original Generation universe from a previous "Kalpic cycle

". As Arteil, Euzeth is the one responsible for the majority of events in the first Original Generation game by bringing "Meteor-3" and the Tronium element to Earth, while arranging the "Aerogaters" to invade. As Euzeth suspected the Earth of this universe contains a "Cross Gate", he funds "Re-Technologist" for their Antarctic expedition into the "Fabula Fores" to excavate it, while simultaneously providing Felio Radcliff technology to improve the "Sympathia System", crucial to defeating the "Ruina". Finally, in order to control the "Nashim Gan Eden", he created Ing Egret, a "hybrid clone" of the "Balshem" series and "Machinery Children" to use as a proxy in place of Irui Gan Eden. Ing's exceptionally latent and powerful "Psychodriver" abilities grows as a result of being sent to the Steel Dragon Battle Group, fostering his power in Euzeth's accordance.

Although Steinbeck is thought to be Killed Off for Real at Gaia Sabers headquarters on Aidoneus Island when the Steel Dragon Battle Group assault the location, he escapes with the Air Christmas and warps to the Cross Gate in the Fabula Fores to revive the "AI-1" using "Zyflud Crystals". Following the Nashim Gan Eden's defeat, Arteil uses the AI-1 to absorb the Gan Eden (and Irui) along with activating Ing as its artificial pilot, creating the "Adamatron

◊", with the Cross Gate fueling it. Steinbeck's Xanatos Gambit pays off and his memories as Euzeth returns, who intends to finish the work he began from before by controlling causality and fate as he pleases, while siring a new race with him as the "Progenitor".

However, Euzeth does not anticipate that absorbing Irui into the Adamatron prevents the "Cross Gate Paradigm System" from being complete, as her own Psychodriver powers keeps him at bay. With some unexpected assistance from Lee Linjun, who warps the Air Christmas into the Adamatron and activates its Self-Destruct Mechanism, Ing is ejected from the monstrosity. As Euzeth does not have full control of the Adamatron due to Irui, the Steel Dragon Battle Group are able to destroy him. All that remains is the in-active Cross Gate hovering in space outside of the Earth.

Because of Steinbeck's true identity, the following tropes are exclusive to him: