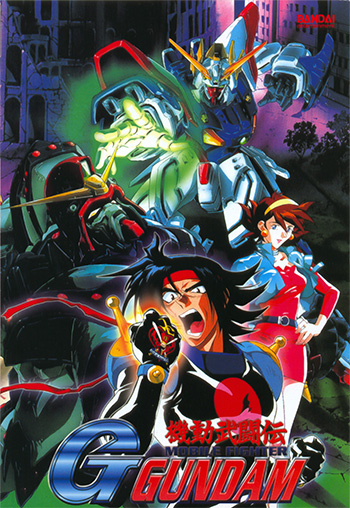 An epic tale of martial arts, Gundams, and awesomeness.
"This hand of mine glows with an awesome POWER! Its burning grip tells me to defeat you! Take this! My love, my anger, and all of my sorrow! SHINING FINGER!!!"
— Domon, Calling His Attack in the hammiest way possible
Advertisement:

Mobile Fighter G Gundam (Kidou Butouden G Gundam, lit. "Mobile Fighting Legend G Gundam") is the first Alternate Universe in the Gundam franchise. Notable as a significant departure from the normal Gundam saga in that it was essentially a Super Robot show. Every Gundam series before and after has been essentially the prime examples of the Real Robot Genre. G Gundam has only a few mild relations to the other series besides the name "Gundam." It also takes a lot of inspiration from the Shōnen genre. Part of this radical change is that Yoshiyuki Tomino set aside series director duties after being burned out on Mobile Suit Victory Gundam, and so they instead got Yasuhiro Imagawa to do the job. You know, the guy who did Giant Robo, Shin Mazinger Z, the first 3 episodes of Getter Robo Armageddon, etc. The result was a series less like traditional Gundam, and more like a classic Super Robot series of yore. Bandai also demanded a Gundam tournament story in an attempt to increase gunpla sales, which were doing poorly at the time.

G Gundam is set in the Future Century (FC) in which The Federation, consisting of several colonies corresponding to Earth's nations, has held a robot-battling competition called the Gundam Fight every four years to determine which colony would gain control of the government. The show's story takes place in the year FC 60, the year of the 13th Gundam Fight, and follows Neo-Japan's Gundam Fighter, Domon Kasshu, as he not only fights to win the Gundam Fight but also searches for his missing brother and the Devil Gundam. As the series progresses, Domon fights his way through several powerful opponents, gains new allies and discovers the truth about his brother, the Devil Gundam, and himself.

The show completely embraced the aspects of the Super Robot Genre and featured, among many other things, a Gundam that not only looked like Sailor Venus, but in one episode GLOMPS

◊ the main character's Gundam. It is impossible to accept this show without understanding Rule of Cool or Narm Charm, but what keeps this as a proud Gundam series is the nature of the Gundam Fight itself. Without the tournament, Earth would return to its previous habit of resolving conflicts... through war.

This was also noteworthy as the first Gundam series made after the toy company Bandai bought Sunrise.

Compare and contrast Macross 7 (which premiered on the same year as G Gundam did) in terms of a franchise sequel that differs greatly from the source material. Or Hetalia: Axis Powers, which takes the National Stereotypes, audacity, and tone and runs with them.

In 2010, as part of a project to revive interest in the Alternate Universe Gundam stories, an updated manga retelling of the series titled Choukyuu! G Gundam began serialization in Gundam Ace.

Is now available to watch online via Crunchyroll

The power of Domon and Rain's love for each other give them the strength needed to destroy the Dark Gundam once and for all.

The power of Domon and Rain's love for each other give them the strength needed to destroy the Dark Gundam once and for all.