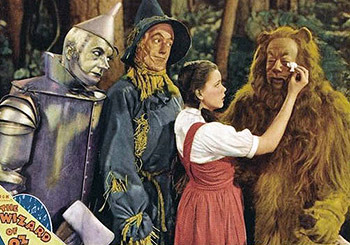 Moments like these are silly, but also just too heartwarming to laugh at.
"When people express what is most important to them, it often comes out in clichés. That doesn't make them laughable; it's something tender about them."
— Terrence Malick
Advertisement:

During a dramatic moment, there is Narm: a line is said too emphatically, or the alien is obviously a guy in a rubber suit.

So why isn't the entire audience laughing?

Perhaps the rest of the work is so good, and they are too wrapped up in it to be bothered. Or what's cheesy is more the fun kind of cheesy, so they are happy, but not laughing. Or maybe Rule of Cool is working its magic. Or maybe it was supposed to seem somewhat cheesy. Or perhaps the Narm feels natural in the scenario presented. Or, if the characters are up against a villain or disaster, despite the silliness of its threat, it's still considered completely and utterly dangerous.

This is Narm Charm, something that by all reason should kill the drama, but doesn't. Some people will still find the scene to be true narm and others will find no narm at all. To some, it's Narm Charm and all part of the fun.

Often invoked as a form of ageism, when something that was considered normal for the time something was made is seen as narm by audiences of a later generation (for example, the fact most actors in the early days of cinema were theatre actors who, naturally, needed to overact a little on stage and knew no better when on camera, or silent-era actors who similarly acted differently than sound-film actors might). The interval between a production's release and it being seen as narm by new audiences is decreasing rapidly .

This is a common characteristic of many a Guilty Pleasure.

If a remake does away with this, it can result in opinions that the original was So Bad, It Was Better.

Compare Undead Horse Trope, Camp, Ham and Cheese, So Bad, It's Good (when something is liked because of the Narm).

Do not state you disagree with an example, or that other people would. No example here is meant to be absolute.

The fact that the climax can be summed up as a DJ-battle where the day is saved by everyone doing the macarena is so stupid, yet it's so hilarious that most people don't mind. What cements it is the dopey face Tinkles makes when he does it.

The fact that the climax can be summed up as a DJ-battle where the day is saved by everyone doing the macarena is so stupid, yet it's so hilarious that most people don't mind. What cements it is the dopey face Tinkles makes when he does it.