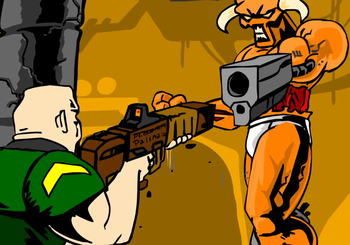 John firing his "palsma rifle" at the Cyberdemon, as seen in the animated adaptation.

DOOM: Repercussions of Evil is an infamous Doom fanfic and the best known work of FanFiction.Net user Peter Chimaera. The story focuses on space marine John Stalvern as he fends off a demon attack on his base that he has been expecting for years.

Like My Immortal, the story is well known and has spawned numerous parodies and dramatic readings, including a presentation

) made with The Movies. There is also a song by tomexplodes

and even a Madlib.

The story was eventually unpersoned from Fanfiction.net, but can be found here.

And good ol' 1d4chan has a massive compendium of variants. Like this thing.

from the Doom game parody WAD Mock 2: The Speed of Stupid.

No, John. You are the Tropes:

And then John was a Troper.