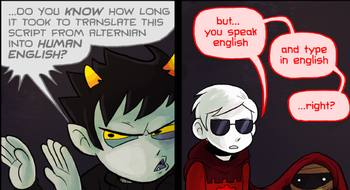 Marge: You... you speak English?
Kang: I am actually speaking Rigelian. By an astonishing coincidence, both of our languages are exactly the same.
— The Simpsons
Advertisement:

As unlikely as it may seem, most alien species can speak English — or Japanese, or French, or whatever the language of the show's producers and intended demographic is. This has the added advantage that the aliens can sometimes lapse into their native tongue when the script demands.

Not to be confused with a case of Translator Microbes or the Translation Convention, where the aliens are logically assumed to be speaking their own language and the words are getting translated en route (and any questions of why their lip movements should synch with their translated dialogue instead of syncing with their original tongue can be simply ignored). This trope is when the aliens really did learn to speak a human language In-Universe — hey, if they've been watching our television shows all this time, they could have easily figured it out by now. Of course, if a story is not about a First Contact scenario, and the aliens have been in contact with humanity for a while, the aliens speak English because they have dealings with English-speaking humans. Or in stories where aliens have been influencing Earth civilization for long enough, it could be that they speak English because it was their language first and they taught it to us. Sometimes, authors also like to have some short explanation, even if it is only a quick Handwave.

If you want to keep things lively, using a Bilingual Dialogue with alienese as the foreign language is always cool. If you want your aliens to be quite scary, have them instead speak in the Black Speech.

Usually these are Acceptable Breaks from Reality, because not knowing what the aliens are saying would be quite uninteresting, and having the show's cast spend the first half of every episode learning how to say 'hello' in the Alien Language of the Week seriously undercuts the story and makes the people who are listening to it in-universe with sentences like "I don't understand this". However, Aliens Speaking English isn't totally inevitable either, as it isn't that impossible to put an imaginary language and English subtitles.

Sometimes, the language is quite like the earthen language of the author, but the words and expressions involving "earth" and "human" are replaced by puns using the word the aliens uses to name themselves.

If the words are understandable but the grammar rules are not, then it's a Strange-Syntax Speaker. See Eternal English for the time travel equivalent. Occasionally justified by a Common Tongue. Compare Anime Accent Absence for when the Japanese forget to put accents on their foreign characters. Contrast Starfish Language, which is the opposite of this trope.

When Cole meets Norg, he speaking English. When Cole notices this, he asks Norg if he knows English and Norg tells him he knows a little bit.

When Cole meets Norg, he speaking English. When Cole notices this, he asks Norg if he knows English and Norg tells him he knows a little bit.