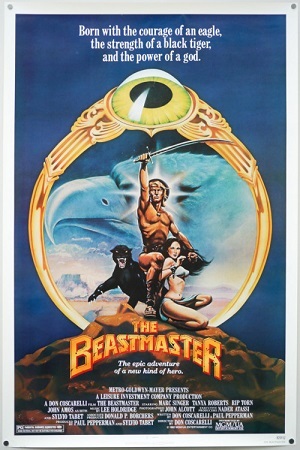 "The courage of an eagle, the strength of a panther and the power of a God. The epic adventure is back like never before!"
— Tagline
Advertisement:

A 1982 fantasy movie from Don Coscarelli, starring Marc Singer in the title role alongside Tanya Roberts and John Amos, that became best known for its repeated late-night airings on cable, in particular TBS and HBO throughout the 80s and 90s. note  Both channels respectively got the Fan Nicknames of "The Beastmaster Station" and "Hey, Beastmaster's On.".

Maax (Rip Torn) is a twisted cult leader out to steal the throne of King Zed (Rod Loomis). Banished by Zed for his treachery, Maax sends one of his three witches to steal Zed's unborn son, ripping him right out of his mother's womb with magic and placing him in a cow's womb, and cutting him out of the cow. Before she can finish the job, a brave hunter kills the witch and rescues the young boy, naming him Dar. Dar and his adoptive father find out at a young age that Dar possesses the power to communicate with animals. When Maax sends his horde of thugs to wipe out Dar's peaceful village, Dar sets out to defeat Maax using his powers and avenge his people and foster father.

Very loosely based on Andre Norton's scifi novel The Beast Master; about the only thing it has in common is that it's about a adventuring hero on another world who can communicate with animals and has an eagle, a big cat and two meerkats/ferrets as companions, and is seeking revenge for the death of his father. The character in the novel is a Native American ex-soldier retired from Earth's military living on a Space Western colony planet. In fact, Norton was so disappointed by the liberties taken with the source material that she asked for her name to be removed from the credits.

Marc Singer returned as Dar in two sequels, Beastmaster 2: Through the Portal of Time (1991) and the Direct to Video Beastmaster 3: The Eye of Braxus (1997). In addition, there is also a re-cast television series remake called Beastmaster that qualified as a somewhat vindicated-by-reruns show.

The Beastmaster has examples of: