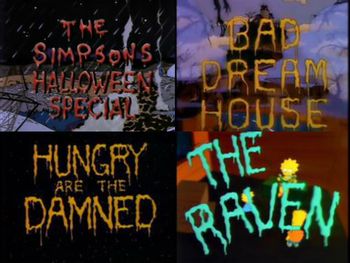 The beginning of an annual The Simpsons tradition! It begins with Marge giving a warning to viewers, in a parody of Frankenstein (1931). Then the episode proper opens with Homer out trick-or-treating on Halloween night, disguised as a ghost, when he notices that Bart, Lisa and Maggie are up in the treehouse, with Bart and Lisa attempting to scare each other with their own horror stories, and he decides to listen in. Noteworthy as the only "Treehouse of Horror" episode that actually has a treehouse setting. It's also noteworthy for being the first episode composed by Alf Clausen, who continued to compose for the show for 27 years.

Bart, unimpressed with Lisa's first story, tells this parody of The Amityville Horror (1979). The Simpsons move to an inexpensive house, unaware that it carries an evil curse. They notice that in the house, items being moved are being thrown at the Simpsons on their own, and the kitchen contains a vortex into another dimension. The house's inhabitant, a malevolent spirit, then demands that the family leaves. The family discusses the idea of leaving, but Homer insists that they stay in the house. The house then possesses the souls of all the Simpsons and causes them to attempt to kill each other. Frustrated, Marge then declares the family is leaving the house. The house then starts threatening them, saying it will kill them all in horrific ways if they don't leave. Marge then yells at the house, demanding to him, "We're all going to have to live together, so you'd better get used to it." The house, realizing that she is right, asks the family to go outside for a moment, so he can think about it. After contemplating living together with the Simpsons for a few seconds, the house opts to self-destruct instead.

Hungry Are the Damned

After Bart's tale of macabre is finished, Lisa argues that it wasn't that scary, and Bart considers it a "warmup" for his next story, a parody of The Twilight Zone (1959) episode "To Serve Man". As the family is having a barbecue, the Simpsons are then abducted by a U.F.O. and sent into space. They are then introduced by an alien named Kang, who then introduces his UFO partner Kodos in their first appearances, and will be taking the Simpsons to their home planet of Rigel-4 for a celebration. The family questions this, but are enticed into having a dinner cooked by the third alien, Serak the Preparer (who has never appeared in any subsequent "Treehouse of Horror" episodes, unlike Kang and Kodos). As they have their own dinner and they give the Simpsons another dinner, the aliens then inform the Simpsons that they will be at a feast when they reach Rigel-4, appearing as the "guests of honor". Serak then says that when the spaceship arrives, there will be enough time to "chew the fat". Lisa then becomes suspicious, convinced that the aliens are fattening the Simpsons so the aliens can eat them. She discovers a book titled How to Cook Humans in the spaceship's kitchen. The family then believes Lisa as she holds up the book, only for Kang to blow some "space dust" off the cover, revealing the title to be How to Cook For Humans. Lisa then blows some more dust off, revealing the title to be How to Cook Forty Humans, then Kang blows even more dust off, revealing it as How to Cook for Forty Humans. Kang then reveals he, Kodos and a crying Serak were only trying to provide the Simpsons a big banquet, and were promising them with paradise that is now impossible due to their distrustful nature. The spaceship then drops the family off in their backyard and leaves. Lisa concludes that their family were the real monsters on the spaceship, not the aliens. The rest of the family asks her to shut up.

Exactly What It Says on the Tin, in the form of Lisa's Dramatic Reading of the classic Edgar Allan Poe story with James Earl Jones as the narrator, Bart as the titular Raven, Homer as the protagonist, Marge as The Lost Lenore, and Lisa and Maggie as two seraphim. The episode then closes with Bart being left entirely unimpressed by the story, and Lisa commenting that since the poem she just read was written in 1845, people were probably easier to scare back then. But meanwhile, Homer sits outside the treehouse, deeply terrified by the story, he then notices the children returning into the house, and he then returns inside himself. Still being scared when going to bed, he begs Marge not to turn off the light, but she reminds him what he heard were just children's stories. The episode ends with Bart appearing as the Raven staring outside the window, while a scared Homer mumbles that he hates Halloween.