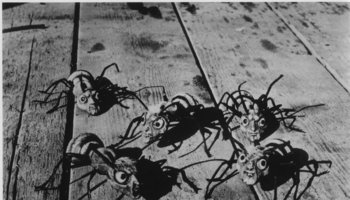 A gang of Zanti fugitives poses for their wanted poster.
The Control Voice: Throughout history, compassionate minds have pondered the dark and disturbing question: what is society to do with those members who are a threat to society, those malcontents and misfits whose behavior undermines and destroys the foundations of civilization? Different ages have found different answers. Misfits have been burned, branded and banished. Today, on this planet Earth, the criminal is incarcerated in inhumane institutions, or he is executed. Other planets use other methods. This is the story of how the perfectionist rulers of the planet Zanti attempted to solve the problem of the Zanti misfits.

Coerced by the planet Zanti, Earth becomes a penal colony for its criminals. However, the situation goes awry when a bank robber and his girlfriend enter the area designated for that purpose.

The Control Voice: Throughout history, various societies have tried various methods of exterminating those members who have proven their inability or unwillingness to live sanely amongst their fellow men. The Zantis tried merely one more method; neither better, nor worse than all of the others, neither more human, nor less human than all others, perhaps merely... non-human.