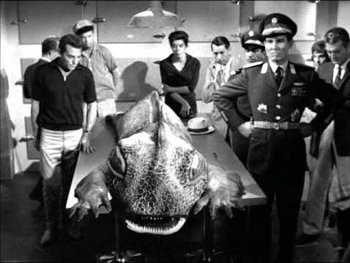 Dexter (in sailing cap), Mercurio (in military uniform) and their entourage examine the catch of the day.
The Control Voice: In Man's dark and troubled history, there are vestiges of strange gods. This stone statue was, once, such a god a thousand years gone by in the central mountains of Pan America. Today, new gods have emerged – the god of power, the god of money. The Republic of San Blas lies west of the Orinoco Basin, slightly north of the Equator. Its principle exports are coffee, copra, mahogany, maize and saffron. In a hundred odd years, the reigns of government have changed many times; in blood, and fire, and death. The last of these revolutionaries was led by Juan Mercurio – the most absolute and powerful ruler of them all. Only the Indians who live close to the old gods in the volcanic uplands are unimpressed. They have seen the coming of the Conquistadors, with the power of their guns and flashing flags...the Revolutionaries, with the power of their zeal and their willingness to die...the Americans, with the power of their money, and bulldozers; with their summer houseboats in the crater lake of Ari Pana; with their gadgets, and machines, and devices...

A lizard-fish discovered in South America creates a power struggle between a dictator and the American who found it.

The Control Voice: The forces of nature will not submit to injustice. No man has the right, nor will the checks and balances of the universe permit him, to place his fellows under the harsh yoke of repression. Nor may he, again, place the forces of nature under the triple-yoke of vanity, greed and ambition. In the words of Shelley, "Here lies your tyrant who would rule the world, immortal."