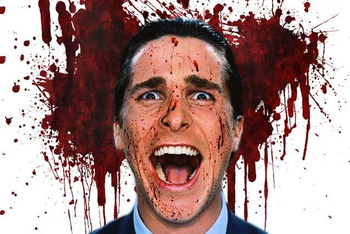 Do you like Huey Lewis and the News?
Lizzie Borden took an axe,
and gave her mother forty whacks.
And when she saw what she had done,
she gave her father forty-one.
— American Nursery Rhyme note For the record, Ms. Borden was acquitted, but never lived it down. There were also far less "whacks" in the actual murders.
Advertisement:

An "ax-crazy" character is someone who is psychologically unstablenote "Unstable" is an excessively mild term here, because it implies that some residual stability may still be present. Being Ax-Crazy usually implies that almost the entire substructure of sanity is gone and presents a clear and present danger to others. They are capable of extreme violence, whether carried out with a Slasher Smile, insane laughter, speaking in a Creepy Monotone, or out and out murderous rage, and with no way of knowing just what will set them off, which makes them extremely frightening to deal with. This mainly differentiates them from other eccentric characters who may themselves be obsessive, weird or seemingly crazy, but use this condition hand in hand with doing good, or at least not being in the way. However, some formerly established heroes can go through an episode of ax-craziness and still retain their heroic mantle.

Despite the title, ax-crazies aren't limited to wielding axes. Any instrument of death will do, from knives or straight razors to swords to chainsaws and beyond. A good number of other ax-crazies are also Trigger Happy, preferring either Hand Cannons that blow really big holes in people, or weapons that allow them to kill lots of people with reckless abandon, such as any automatic weapon. And for the truly psychopathic among psychopaths for whom the above just won't do, a heaping helping of high explosives or a good-sized flamethrower will do quite nicely. Sometimes, they don't even need weapons and just use magic spells or other powers if they have them. There are also plenty who are just as happy to beat people into an unrecognizable pulp-like mass with their bare hands. Less outwardly violent and unstable examples are likely to be the vindictive and vengeful sort; any sort of petty slight (real or imagined) is likely to trigger a Disproportionate Retribution, and these types tend to be more dangerous than the raging psychos due to the lengths to which they will go to carry out their revenge and make the party who attracted their wrath suffer.

It is rare for a truly Ax-Crazy character to be a protagonist, largely due to it being a Sub-Trope of Obviously Evil, and most Ax-Crazy characters usually are Obviously Evil. They're common as the antagonists in Superhero and Crime and Punishment Series, often serving as a Psycho for Hire. If they are a protagonist, they will most certainly be a Nominal Hero, Villain Protagonist and/or Heroic Comedic Sociopath. The difference between them and Blood Knight is this trope is all about killing while the Blood Knight is only interested in fighting. There is, of course, plenty of room for overlap.

See also Insane Equals Violent, The Butcher, The Dreaded, Mad Bomber, Cute and Psycho, Blood Knight, Psycho for Hire, Yandere, The Sociopath, Mad Doctor, Pyromaniac, Hair-Trigger Temper, Colonel Kilgore, General Ripper, Insane Admiral, Sociopathic Soldier, Holy Is Not Safe, Psychopathic Manchild, and Jerkass Gods. Compare and contrast Mama Bear, Papa Wolf, Big Brother Instinct, and Violently Protective Girlfriend, who may be capable of temporary Ax-Craziness when their kids, younger sibling(s) or mate are under threat, but are often played sympathetically. Compare Hot-Blooded, in which the character may have such tendencies but in a less threatening way (even if both could overlap).

The canonical Character Alignment for most Ax-Crazy characters is Chaotic or Neutral Evil, though a couple of Chaotic Neutral examples exist. Sometimes The Unfettered, depending on whether they feel freed or enslaved by their bloodlust. At least one or more examples are an Anti-Villain, where you kinda feel bad for them since their enemies pushed them too far with actions such as killing their family, their friends, or even the enemies trying to kill them, making them go Ax-Crazy.

It's very common to be Played for Drama, usually as either the Big Bad, or The Dragon to the Big Bad. It is far less common, but not unheard of, for it to be Played for Laughs; this is most likely to be seen in a Sadist Show, especially one featuring a lot of Comedic Sociopathy and/or heavy Satire, with it appearing most often in humorous comic strips, Anime, Web Original works, and the more adult-oriented Western Animation of the Renaissance and Millennium periods.

A very large number of pages link to this when they should link to An Axe to Grind. This page is about violent crazy people, not people whose Weapon of Choice is an axe (despite the potential for overlap).

open/close all folders
Audio Plays
Comic Strips
I get it now! It's a play on the phrase "acts crazy"!
Feedback