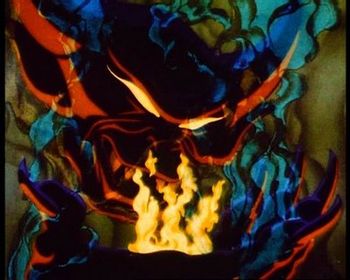 Ladies and gentlemen, what is essentially Disney's equivalent of Satan himself, Chernabog. note Before he was officially given a name, Walt Disney said that he could very well be Lucifer Himself.
"Disney scared the pants off of me when I was a little kid. Disney needs to scare kids!"
— Warren Spector on why he made Epic Mickey the way it is
Advertisement:

Disney is for kids, right? But that doesn't mean that they can't scare the pants off of the kiddos with moments that were meant to be frightening, and even then, these can scare adults too.