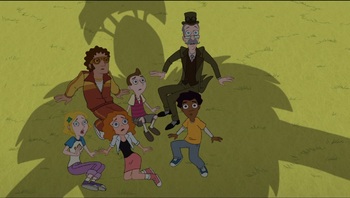 "Now no one can go back and stop us!"note Good thing Diogee didn't go home, huh?
Coming right on the heels of Dan and Swampy's previous show that contained a lot of freaky moments, it shouldn't be a surprise that THIS show would get a lot as well. Especially since it has Murphy's Law in the title.

Expect unmarked spoilers as Spoilers Off applies to Moments pages.

Rooting For the Enemy

The Island of Lost Dakotas

The Phineas and Ferb Effect

Now I Am a Murphy