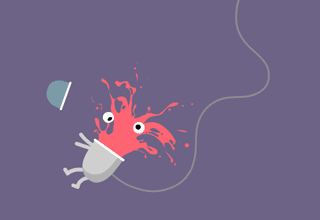 In most fiction, outer space is not friendly. Woe betide anyone foolish enough to step into it unprotected (or unfortunate enough to get Thrown Out the Airlock): they'll pop like a turkey with a grenade stuffed inside.

Well, that's the movie version. The reality is quite different. As unfriendly as the vacuum of space is, the body's made of stern enough stuff to stay in one piece. When you step outside, you've got about 15 seconds before you pass out from anoxianote the medical term for oxygen deficiency, a couple of minutes at best until you die from the same, and all sorts of nasty decompression injuries in between (exposed areas swelling up, body fluids boiling off your surfaces). But, you never quite go boom: remember, technically speaking, your blood is not in a vacuum: it's in you, so swelling and boiling blood only occurs toward your squishiest, outermost layer of capillaries.

Incidentally, holding your breath would be worse than useless; the difference in pressure would cause a serious and fatal embolism even from the smallest amount of air in the lungs resulting in death even if someone manages to rescue you. Though this isn't the bottom line. Pulmonary barotrauma (lung rupture) is possible, but not guaranteed. It is far less likely if the decompression occurs slower than about half a second, which is quite common in sci-fi.

Good luck getting all of this across to most audiences, though. As one of the great classics of Hollywood Science, the belief in explosive decompression is so widespread that audiences are more outraged when it doesn't happen (see The Coconut Effect and Reality Is Unrealistic).

That said, an explosive decompression can happen in real life if you get a really high-pressure gradient - from far above-normal pressure down to atmospheric pressure, say. Or, to be more precise, at least 7 or 8 atm (atmospheres), with 1 atm being normal atmospheric pressure. These pressure gradients are usually only found in decompression chambers meant to allow deep-sea divers to return to the surface without contracting the bends. These chambers are only slightly less dangerous than the alternative of having the divers spend hours underwater as they ascend very slowly. If you're interested, google the "Byford Dolphin" incident - but beware of Nausea Fuel. Most space missions never come close to this, though, as they generally use pressures of 1 atm or less. To get an idea of how low that is: a soda can is pressurized at about 2 to 3 atmospheres above ambient pressure.

The term "Explosive Decompression" is also legitimate, but it refers to the speed at which the decompression occurs, not the result or cause. There has only been one recorded incident of explosive decompression aboard spacecraft

that killed the crew, and numerous cases of explosive decompression on aircraft

(several of which led to crashes). But while it certainly can cause part of the airplane to explode (due to whatever fault caused the decompression in the first place), the usual result for passengers is either slow hypoxia, or if they are really unlucky a chance to go skydiving without a parachute.

See Space Is Cold for another way that space doesn't instantly kill you. See also Continuous Decompression for how Hollywood Science handles actual Explosive Decompression.hint They still usually get it wrong.

A really unlucky character might suffer Fold-Spindle Mutilation as they're blown into space, then undergo Explosive Decompression.