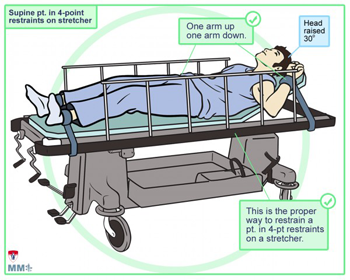 In many works, a character can end up being Not Himself. He or she could even hurt someone, or admit to someone that they are worried they might hurt someone. Sometimes, they're just acting oddly enough to give people reason to think that they're crazy and/or dangerous to themselves and others. Often, their freedom is taken away by their own friends or allies to keep them safe and unable to harm themselves or other people. This could be by restraint, sedation, or confinement.

This will often happen in a safe location, such as their base or a hospital (or whatever serves as one), and will often result in some fight between the captive and the captor(s). This can result in Breaking the Bonds, or if they gain superpowers it could become a Cardboard Prison. Those keeping them captive may employ some sort of Kryptonite Factor to keep them under control. This could also result in an Unwanted Rescue. If they ask to be restrained, it can overlap with No Matter How Much I Beg.

The character being confined does not need to be willing, and the characters to whom they lose their freedom don't need to be benevolent. However, their confinement has to be for safety, and not for malice or punishment, in order to actually fit this trope.

Subtrope of Cruel to Be Kind. See Percussive Prevention for a more extreme version of this trope.