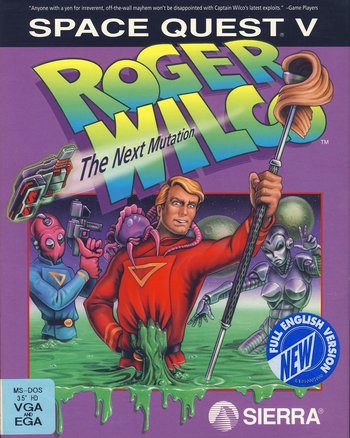 You're gonna need a bigger mop.
Space Quest V: The Next Mutation (also simply known as Space Quest V) is the fifth game in the Space Quest series, released in 1993. Roger returns to Xenon after his previous adventure, and decides to finally pursue his dream of becoming a space captain. He manages to graduate from the StarCon academy thanks to a combination of cheating on his aptitude test coupled with a serendipitous computer glitch, and is given his first command: The SCS Eureka, a garbage scow.
Advertisement:

While collecting garbage around the galaxy, Roger and his new crew manage to stumble onto an illegal garbage-dumping conspiracy. They are eventually tasked with stopping a mutagenic disease that resulted from this illegal dumping, which to their dismay has infected the SCS Goliath — StarCon's flagship — commanded by Roger's new rival and nemesis, Captain Quirk. To further compound his problems, Roger's love life is thrown into chaos when he meets Beatrice, the woman whom he learned in Space Quest IV will give birth to his son.

This is the first game in the series not to be designed by both Guys from Andromeda, only Mark Crowe was involved. It was also the only Space Quest game to not be developed in-house by Sierra, but by its sister company Dynamix, where Crowe was relocated shortly after the release of Space Quest IV, in order to help Dynamix get a feel for Sierra's SCI engine. A voiced CD version of the game was planned, but was ultimately shuttered as the developers were undergoing financial difficulties at the time and the decision was made to focus entirely on new games rather than upgraded versions of preexisting games.

No connection to Ninja Turtles: The Next Mutation.