Landfill Beyond the Stars 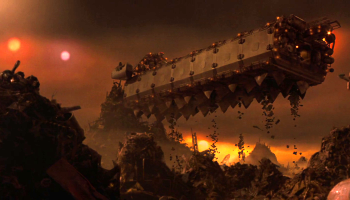 But where do they dump the planet when it's full?
"This must be the junk capital of the universe."
— Daniel Witwicky, The Transformers: The Movie
Advertisement:

In Speculative Fiction, one will sometimes find that entire planets get used as interstellar landfills. Implicitly this means that it is somehow worthwhile to launch refuse into space and take it to another planet, possibly one that is located in another solar system, in order to dump it there, rather than give it a push towards the nearest star, dump it on a nearby worthless, uninhabitable rock, or just recycle the stuff (not to mention massive and cheap energy sources that make such launches worthwhile in the first place — just getting into space in the first place is a lot harder than most people think).

In many cases, the landfill-planet will even be habitable, if only barely, for the convenience of the protagonists who will naturally end up spending time there at some point. Locals will usually be scavengers of some description, picking through the mountains of junk and/or freshly arrived loads for anything they can use or sell, which may or may not include the main characters. Hobo cities built out of scrap optional. There may even be flora and fauna living here, ranging from hardy animals and plants, to Metal Muncher creatures that managed to adapt and thrive on eating the abundant amounts of metal lying around.

For this trope to work at all, the setting must have very Casual (and VERY CHEAP) Interstellar Travel. There are, however, ways to harden this trope: make the planet in question a useless dwarf planet in a nearby asteroid belt, Ceres-like (delta-v to reach such a planet could be really low), used only to dump garbage of space origin from the same system, and equipped with dirty recycling industries that make it more efficient to fling refuse there, rather than into the star. Rarely will it ever be a recycling planet of some kind, which would justify moving massive amounts of junk there. For this trope on a smaller scale, see Down in the Dumps.