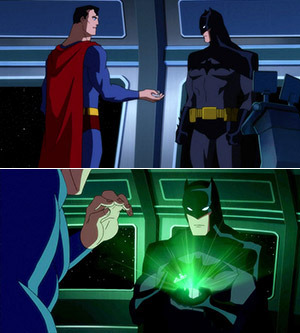 Nothing says true friendship better than to give your buddy the only thing that can kill you. note  But let's be honest; Batman already had kryptonite.
Superman: I have many enemies who have tried to control me. And I live in fear that someday, they might succeed. If that should ever happen — if I should ever lose control — there would only be one sure way to stop me.
Batman: Do you realize what you're asking?
Superman: I do. I want the means to stop me in the hands of a man I can trust with my life.
— The Death of Superman (flashback)
Advertisement:

In an optimistic setting, this device is from a character who is aware of their Kryptonite Factor and puts the means to stop them in the hands of another (usually, in case they're brainwashed or go evil somehow). This usually implies a bond of trust since the receiver often has mixed feelings about the idea and the giver has to insist. This is also a show of good faith to a skeptic so he will allow the hero to operate in a legal grey area.

This trope is named after the ring Superman gave Batman in case he ever got out of control.

Compare Betrayal Insurance where the "stopping" character came up with it on their own; exactly how extensive this planning comes off can seriously affect the relationship depending on how betrayed the other feels. May overlap with Mercy Kill Arrangement if the results are likely to be fatal.