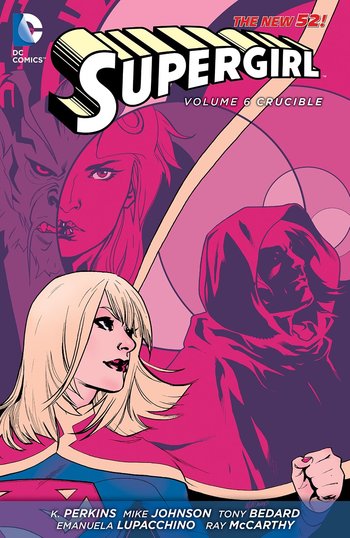 ''They call this place Crucible. It exists to train the strongest members of every species in the universe. The question is... Do I really belong here at Crucible?
— Kara
Advertisement:

Crucible is a Supergirl 2015 storyline, written by Kate Perkins and Mike Johnson and illustrated by Emanuela Lupacchino, told in Supergirl (2011) issues #36-40. It is chronologically set between Superman: Doomed and Superman: Truth.

After her tenure as a Red Lantern, Kara Zor-El's life has recovered some semblance of normality and stability. She has gotten over most of her loneliness and anger issues, has accepted her role as a protector of Earth, and now she is trying to adapt to her new home and make friends as keeping a civil relationship with her cousin. After several months of relentless misery, things are at last starting to look up.

Or they were until Kara is abruptly abducted to Crucible Academy, an interstellar school for superheroes. Believing they can help her hone their skills, Kara agree to attend Crucible. However, she cannot help but wonder if she really belongs at that place, and if she can trust Crucible.

It is a good question, because even though most of professors are well-meaning, not all of them have their students' -or the universe's- best interests in mind.