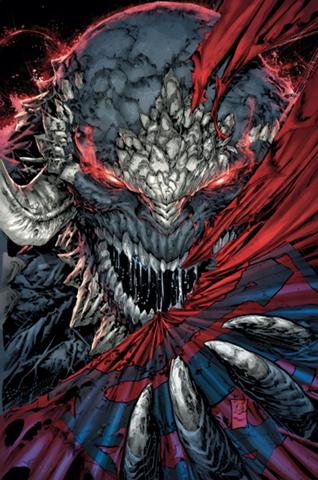 Superman: Doomed is the third and final Superman crossover story arc of the New 52. Starting in May 2014, the story begins in the Superman: Doomed #1 one-shot and continues through the Action Comics, Batman/Superman, Superman/Wonder Woman, and Superman titles. It is written by Greg Pak, Charles Soule and Scott Lobdell. The Superman title wrapped up its portions earlier than the others and began a new storyline by Geoff Johns and John Romita Jr. Similarly, Batman/Superman was only involved in the arc for one issue before the book took a different direction. The story arc ends in the Superman: Doomed #2 one-shot, released in September 2014.
Advertisement:

Based on The Death of Superman, Doomsday has reappared once again on Earth, forcing Superman to confront it. After a brutal fight, Superman is infected with a mysterious virus that begins to transform him into a Doomsday-like beast called "SuperDoom". As Superman seeks a cure to his condition, Brainiac enacts his plan to take over Earth.