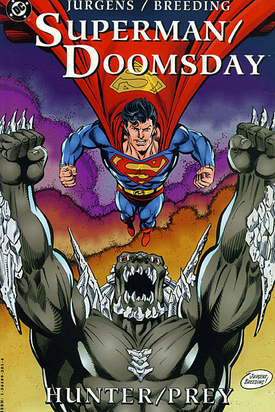 Superman/Doomsday: Hunter/Prey is a three-issue mini-series published by DC Comics in 1994. It was written by Dan Jurgens, with artwork by Dan Jurgens and Brett Breeding. In the story, which takes place some months after The Death of Superman, Superman must now face Doomsday again as he awakens from his death on board a ship headed for Apokolips. Its ruler Darkseid having failed in stopping the monster's assault, Superman comes to the aid of protecting its citizens from both Doomsday and the also newly-risen Cyborg Superman, hoping to stop the monster for good as it carries its rampage over to the planet of Calaton. With Waverider from Armageddon 2001 offering assistance, Superman learns the origin of the creature and why it was created in the first place.