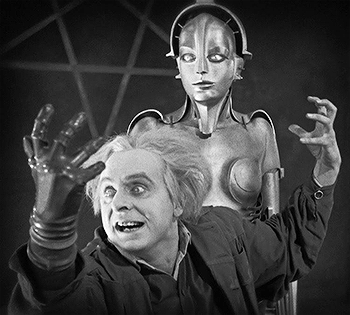 "I'm telling you, the fish was THIS big...!"
"He stood in the center of the room, his head thrown back in silent laughter, his arms raised above his head, his fists clenched in that famous, overly dramatic gesture known to theatre students everywhere as 'milking the giant cow'. Yes, it was hokey and clichéd, and Voltmeter knew it, but he loved doing that gesture anyway, the quintessential stance of a man mad with power."
— Heroics for Beginners
Advertisement:

Among drama students, "Milking the Giant Cow" is a term that refers to the practice of holding your hands skyward (or merely gesticulating wildly) to show emotion. May be accompanied by a Skyward Scream.

If they fall to their knees while doing so, they are contractually obligated to raise their hands to the heavens, grasp the invisible teats tightly, and pull down a few times, as if milking an oversized bovine.

This also occurs when a character just can't sit still. A character may pump his hands up and down theatrically while speaking... "for emphasis". If played for laughs, he will be holding a beverage (or some sort of blunt object) — which will, of course, go flying everywhere.

If it is done in order to Chew the Scenery, it may be necessary to Milk The Cow. Not to be confused with Ham and Cheese. Unless the actor chooses to milk while ordering Ham and Cheese to chew. Or other dairy products.

A critical part of being a Large Ham. See also Big "NO!", Angry Fist-Shake, Futile Hand Reach, Gloved Fist of Doom, Got the Whole World in My Hand, and Skyward Scream, as well as particularly over-the-top cases of Italians Talk with Hands. In a World of Ham, everyone does this. Often part of Going Through the Motions. If one tries to dial back on this, they might go Finger-Tenting instead.

Not related to milking a franchise or the trope about actually milking cows.

Sabaton frontman Joakim Broden has a habit of beating on his right knee during performances. According to bassist Par Sundstrom, he's occasionally ended up with bruises. - From Swedish Empire Live, filmed at Woodstock Festival Poland (now Pol'and'Rock Festival) in 2012.

Sabaton frontman Joakim Broden has a habit of beating on his right knee during performances. According to bassist Par Sundstrom, he's occasionally ended up with bruises. - From Swedish Empire Live, filmed at Woodstock Festival Poland (now Pol'and'Rock Festival) in 2012.