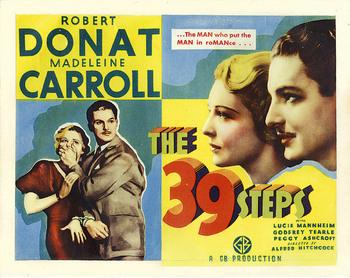 The 39 Steps is a 1935 Thriller film directed by Alfred Hitchcock and starring Robert Donat and Madeleine Carroll. It is adapted from the novel The Thirty-Nine Steps by John Buchan; later film versions were made in 1959, 1978, and 2008.

The film keeps the basic outline of the plot, in which Richard Hannay (Donat) has a chance encounter with an agent trying to defeat foreign spies active in England, then is framed for the agent's murder, forcing him to go on the run and defeat the spies himself to clear his name, knowing only a few things the agent told him before dying, including a cryptic reference to "the 39 steps".

It also makes many changes, updating the setting to the 1930s, changing the doomed agent into a female spy of Central European origin, adding a love interest (Carroll), changing the purpose of the foreign spy ring (stealing a secret formula instead of plotting an assassination), and giving the story a completely different denouement, in the process also changing the meaning of "the 39 steps". In this version, the 39 Steps is the name of the spy ring. Some Black Comedy and Screwball Comedy elements are also added to the story.

Typically considered the best of Hitchcock's British films (and one of the best British films of all-time), it became an international success, and it was the film that first earned him the title "Master of Suspense" (from a review in The New York Times).