Pushed in Front of the Audience 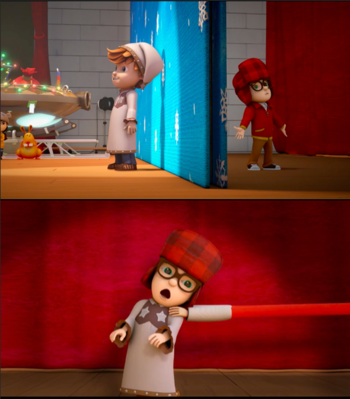 Always make friends with loner kids; they make great substitutes for when you get Performance Anxiety.
Advertisement:

A situation in which one or more characters are unexpectedly asked (or compelled) to take an acting part in a Show Within a Show. Maybe they just happen to be present backstage when one of the real actors suddenly collapses, or maybe they get mistaken for the real actor for some reason and have to play along, maybe they literally drop on stage by accident while doing something else, or maybe getting on stage is the only way for them to get close to a MacGuffin. Whatever the cause, they'll find themselves out in front of everyone trying to pretend that they know what they're doing. They might have a brief opportunity to skim the script, or they might just have to make it up as they go along, but expect it to be awkward either way.

Most of the time, the show in which they're forced to act is a play or other live theatrical production, but it could also happen with other media.

It can sometimes happen in video games, which requires that the players themselves do a plausible job of remembering their lines.

A frequent cause of Bad "Bad Acting". See also All Part of the Show, which is when characters aren't trying to follow their actual role, but the audience thinks they are anyway. When a character stands up to perform (as opposed to being pushed) because it's their best/only option, they are Holding the Floor. Frequently employed as part of the Concert Climax. May result in the Concert Kiss.