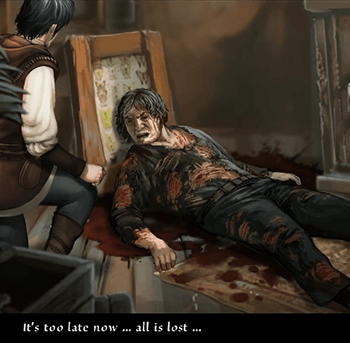 Heavily wounded and on the verge of death, the Almost Dead Guy manages to stay alive just long enough to answer a question, or give a message (or at least the first part of a message — or even an insult). Almost Dead Guys seem to have a sixth sense of their value to the plot, and if necessary will cling to life for hours, sometimes even days, only to die within minutes of being questioned. Expect this character to die with their head heavily nodding to one side.

Sometimes, they have survived without serious injury, but are still in the middle of danger. They reach the heroes, they deliver the message, and then they get struck down. Sometimes after escaping injury for hours or days. This can be a case of Truth in Television, because in Real Life, human beings are often much tougher and harder to kill than people think, and in some cases have held on for months before finally expiring from their injuries.

Pretty much the opposite of the Impeded Messenger. Also contrast with Not Quite Dead, and with Only Mostly Dead, in which proximity to death is the same, but the implication is that the patient can be saved. Compare with His Name Is... where he dies just before he can give out the information. If it's a MacGuffin or another Plot Device that's bequeathed rather than information, it's I'm Dying, Please Take My MacGuffin.

When the story follows the character who has learned something that must be told, it's Bring News Back (where the survival rate is somewhat higher.) Compare also Pursued Protagonist, where the messenger is in mortal peril but stands a better chance of becoming a significant supporting character.

Almost Dead Guy is closely related to Mortal Wound Reveal, and vice-versa. It may lead into the almost dead person doing The Dying Walk.

Truth in Television, of course. Much of the drama of this situation comes from the fact that in most common law jurisdictions (e.g., Canada, the US, etc., though not England any more) one of the few times hearsay is allowed in sworn testimony is when repeating a dying person's last words.

See also Final Speech. If no one is nearby to hear the message when the guy "graduates" from the "almost" part, there's an option of leaving behind a Dead Man Writing. See Wring Every Last Drop out of Him for when the death is less useful.