Film / The Mystery of the Hooded Horsemen 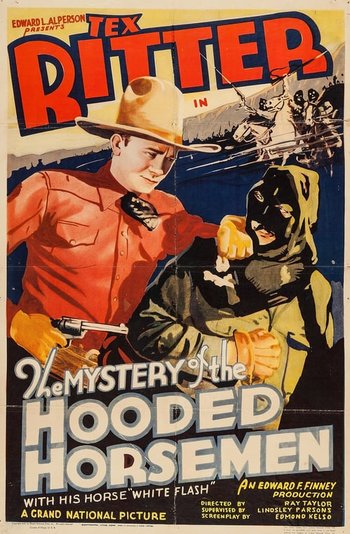 The Mystery of the Hooded Horsemen is a 1937 American film directed by Ray Taylor. It was Singing Cowboy Tex Ritter's eighth film for Grand National Pictures.

In a small frontier mining town, a gang of outlaws in black hoods is running roughshod over locals, presiding over a reign of terror. Tex (Tex Ritter) and Stubby (Horace Murphy) take up the dying wish of Tom (Lafe McKee), a kindly rancher killed by the gang, to capture the marauders. Knowing that the survival of the local mine and the heart of Tom's sweet niece (Iris Meredith) are on the line, Tex and Stubby go undercover in the gang, hoping to bring them down from the inside.

The Mystery of the Hooded Horsemen contains examples of: