Disposing of a Body 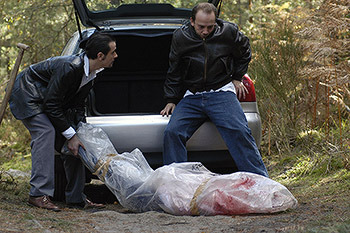 "Take away the horror of the situation. Take away the tragedy of her death. Take away all the moral and ethical considerations you've had drummed into you since childhood, and what are you left with? A 105 lb. problem."
— Robert Boyd, Very Bad Things
Advertisement:

Following a death, either accidental or deliberate, no matter how skilfully the responsible party covers it up, there remains the problem of disposing of the most obvious and most damning piece of evidence for the crime: the body itself. (There have been jurisdictions where no corpse means no murder, and, even where this isn't the case, the lack of a body makes the investigation and prosecution much harder.)

A well-designed Death Trap may include its own way to eliminate the victim's corpse, thus combining the two tropes.

There are numerous popular methods for doing this:

A common way to indicate that a bad guy is not to be messed with is if they have an original and well-thought-through method in place to entirely obliterate a human body if needed. This indicates either that they're Crazy-Prepared, or that it's something they frequently find themselves having to do.

Pretty much any action movie with a significant body count won't even bother with this trope; the exception is if it's supposed to be taking place under The Masquerade, in which case The Men in Black may send in a Cleanup Crew to do the job.

See Bury Me Not on the Lone Prairie, in which any post-mortem hijinks are the direct request of the deceased, and Of Corpse He's Alive, when someone tries to pretend a dead body... isn't.

Contrast Dead Guy on Display, when the body is deliberately put somewhere it will be seen, often to send a message to the person who finds it.

This is a Death Trope; spoilers ahoy.

Hoping that the monster you killed is just gonna go "poof!"? TOOOO BAD!

Hoping that the monster you killed is just gonna go "poof!"? TOOOO BAD!