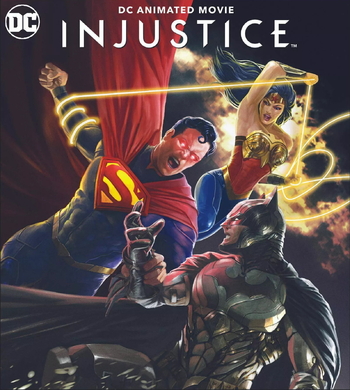 "What happened to Metropolis can never be allowed to occur again."
Batman: You took his wife, you took his unborn child, and his city. Why?
Joker: After all these years, Batsy, you really need reasons from me?
Advertisement:

Injustice is a Direct to Video movie produced as part of the DC Universe Animated Original Movies based on the video game franchise of the same name and its comic book prequel. It serves as a Compressed Adaptation of those stories and is an Alternate Continuity to them. The film was released on October 19, 2021.

Set in an Alternate Universe where the Joker tricks Superman into killing his wife and unborn child and setting off a nuke in Metropolis, Superman kills the Joker in revenge and starts to take a more brutal approach to crime with Batman opposing him.

These tropes will bring about Superman's fall to evil.

The Joker killing Jimmy Olsen, kidnapping Lois and then tricking Superman into killing her along with their unborn child, nuking Metropolis in the process.

The Joker killing Jimmy Olsen, kidnapping Lois and then tricking Superman into killing her along with their unborn child, nuking Metropolis in the process.